Basketball Captain Kneels in Prayer Before Each Game 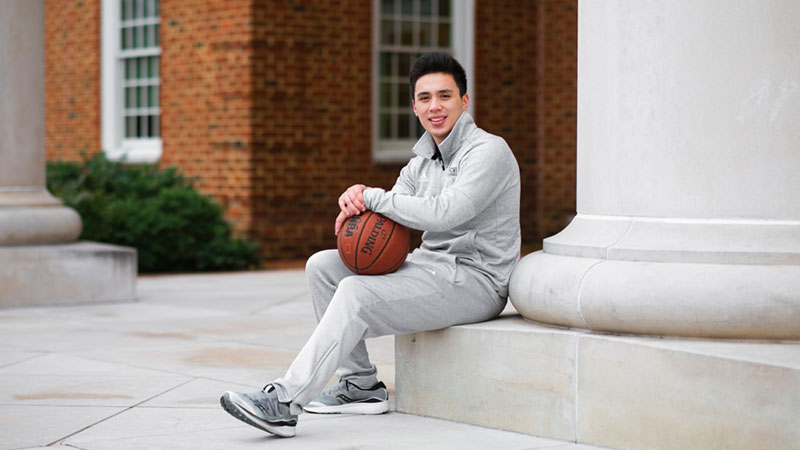 Just one conversation with Regent Royals Men’s Basketball Captain Drew Aiken (CAS, ’22) and you can see: He is a born leader and serious about his faith.

Aiken started this habit a high school athlete after his mom spoke to him about Gideon bowing to the Lord before a battle. This complete surrender to God is something he hopes his teammates can also follow.

He says his hunger to be excellent in sports – both in character and in athleticism – grew rapidly in high school. So did his desire for others to pursue a relationship with Christ.

In fact, during his senior year of high school, Aiken helped create Bible studies and group lunches after the tragic death of one of his peers. “Throughout my entire high school career, I was really selfish … really focused on myself. After that, I was like ‘Hey, this kid was walking around our hallways; I felt like I could’ve done something to help him,’” he shares.

Determined to bring answers and hope, Drew helped his classmates pick one another up and understand not just religion but the love of Christ and relevant power of the Word: “I organized different Bible studies for everybody … and tried to speak up in different events for my class. I organized an All-School Lunch where we would all eat lunch together and make sure that nobody slipped through the cracks again.”

The Power of Family

The intent for Aiken was obedience, action, and promoting community. A self-described “people person,” Aiken is no stranger to the power of community and teamwork. He defines his home as constantly “hopping” with the love and excitement generated by the organized chaos of doing life with his three younger siblings and an older sister – a dynamic he absolutely loves.

Aiken’s family also played an important role in his discovery of his passion for basketball. When Aiken was a toddler, his dad encouraged him to play ball. He began shadowing his dad, who would take him to University of Pittsburgh games and to his own pick-up basketball games with friends.

Aiken’s own big moment came when, as a sophomore in high school, he played against the best team in the state: “I hit a shot to win the game … we were playing against the number-one team in the state in the playoffs, and they were undefeated … it was the coolest thing in the world!”

This success would stand out as a highlight from his high school career. It was only earned, however, after dealing with some difficulties during his freshman year that pushed him to become a better player. “My freshman year there [were] some games where I would only score two points. I would feel bad [for] myself, so I ended up locking myself in the gym [to practice],” he says.

It was this kind of determination to improve his game that eventually got him to the playoffs during his sophomore season, and, ultimately, what he believes helped him land a spot as one of the captains of Regent’s basketball team: “My dad has always said that it’s not talent that brings you far; it’s heart and work ethic.” 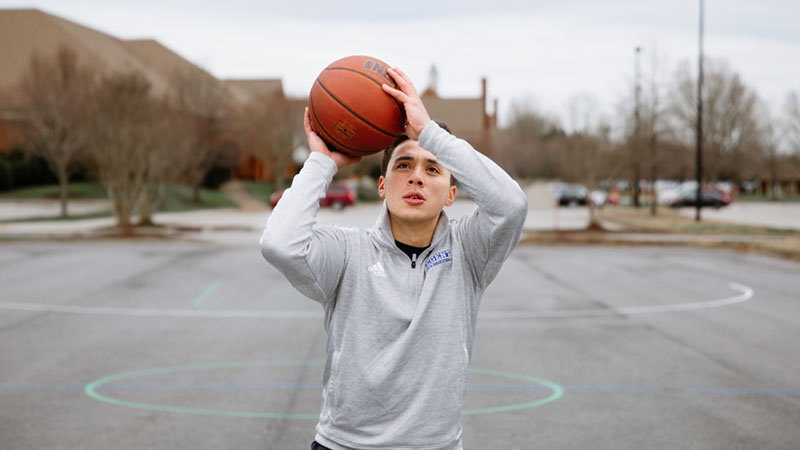 “It was easy to go up to a stranger on the street and [ask], ‘Have you met Jesus?’ but [talking about Jesus to a] kid that you’re competing against for a spot on the basketball team is hard.”

A Detour to Destiny

Before he made it to Regent, Aiken went through a season of uncertainty regarding his future and what would come next after high school.

Because he was unsure of what he wanted to study and where he should pursue his bachelor’s degree, he settled on going to a ministry school that he and his parents chose. There, he embarked on lots of “mini mission trips,” including one that gave him an unforgettable opportunity to lead someone to Christ.

“There was this guy at the bus stop, and his name was Daniel. …I lead him to Christ, and that was like the craziest thing ever, better than any basket that I’ve ever scored. It felt like for the first time I had eternal significance,” Aiken shares.

Hungry for more spiritual, academic and athletic opportunities, Aiken began to look beyond the ministry school for new challenges and the next steps he needed to reach his full potential. His dad prompted him to look into Regent University, where he had earned his master’s degree years earlier. During a campus visit, Aiken discovered the next path the Lord had for him while waiting to speak to Regent’s soccer coach.

“The athletic director ended up sitting in our meeting. …I don’t know how, but we started talking about basketball,” Aiken explains. “The director [said], ‘You know what? I’m going to offer you a scholarship right now. … I can tell that you have high character.’ He was relying on the Holy Spirit to affirm the decision, and out of that, I was offered a scholarship.” For Aiken, this was a sure sign of where God needed him to be.

Just months later, Aiken left his home of Pittsburgh to come to Virginia Beach, where he has since been playing for the Royals and pursuing a bachelor’s in business marketing, something he hopes he can use to help with future fundraising and missions.

Embracing the Stretch, Win or Lose

His personal challenge since coming to Regent has been to embrace the stretch … stretching himself academically by trying to make every paper and assignment the very best it can be. And also stretching spiritually by reaching out to others his age and speaking to them about Jesus.

“Talking to other kids about Jesus was the hardest thing for me,” Aiken admits. “It was easy to go up to a stranger on the street and [ask], ‘Have you met Jesus?’ but [talking about Jesus to a] kid that you’re competing against for a spot on the basketball team is hard. Most of the kids here know Jesus; now it’s [about] … creating a deeper relationship with Him.”

His commitment to hard work, true leadership and the Gospel was witnessed by many at the beginning of the 2019 school year when Aiken gave a devotion for the entire athletic department on the five things he wished he had learned before going into high school. He chose this topic as an encouragement for his younger brother who was just beginning his high school journey. Aiken hoped to pass on tips from his own mistakes. Little did he know he the positive impression he would leave on a bigger audience.

“I had a lot of people come up to me later and say that it impacted them,” he says. “Something kind of clicks whenever I talk about the Bible. I really feel like it’s not my words; I have a calmness that it’s not all on me.” For Aiken, sharing hope and vision is something he wants to use in the next phase of his life – both in business and ministry.

And through all of life, he says, “I want my ‘team’ to grow closer together and to give all the glory to God … in our wins and our l
osses.”

By Abby Trivett – Student Writer. Abby is a department head for The Daily Runner. She will be graduating in Fall of 2020 with a B.A. in Communication Studies with a concentration in journalism. She wants to become a news anchor for a Christian news outlet.