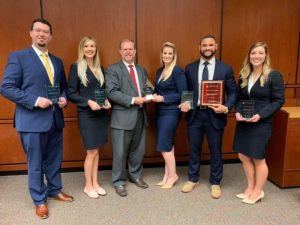 The competition, which took place October 10-13, brought 16 invited teams together from law schools around the country, including Texas Tech and Chapman, to argue both sides of a sample problem. Teams wrote two memoranda of law that were scored, made an evidentiary presentation of two witnesses, and made a motion argument based on the evidence presented and arguments made in the memoranda of law. This year’s competition problem focused on inmate rights issues.

In addition to the team winning the overall competition for the second straight year, Marcus Mitchell also won the best overall advocate and Charlie Morrison won the best advocate in the semi-finals.

“We are so proud of these students for the hard work they put in and for representing Regent Law with excellence,” said Mark Martin, dean of the School of Law. “This win is a testament to our faculty and their dedication in training the next generation of excellent lawyer advocates.”

“It is an honor to coach such passionate students; they put in countless hours preparing for this competition and conducted themselves with professionalism and grace,” said Regent Law professor Andrew Page, who served as the team’s coach for the competition.

Regent Law’s more than 3,300 graduates practice law in 49 states and over 20 countries and include 38 currently sitting judges. The School of Law currently ranks in the top 25 percent of all law schools for obtaining judicial clerkships and achieved the highest overall passage rate on the Virginia bar exam (July ’17 and February ’18). The school offers the Juris Doctor (J.D.) in three-year and part-time formats, an online M.A. in Law, an online M.A. in Financial Planning & Law, an on-campus LL.M. in Human Rights and an on-campus and online LL.M. in American Legal Studies.

Founded in 1978, Regent University has nearly 11,000 students studying on its 70-acre campus in Virginia Beach, Virginia, and online around the world. The university offers associate, bachelor’s, master’s and doctoral degrees from a Christian perspective in 135+ program areas including business, communication and the arts, divinity, education, government, healthcare and nursing, law, leadership, and psychology. Currently, Regent University is ranked among top national universities by U.S. News & World Report and is one of only 23 universities nationally to receive an “A” rating for its comprehensive liberal arts core curriculum.