Past Blessings and a Bright Future: Dr. M.G. “Pat” Robertson Discusses the, “Destiny of Regent” at Chancellor’s Chapel 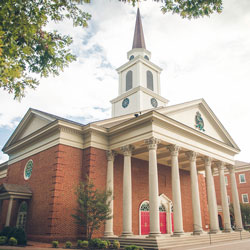 Regent is located on what was once an ordinary soybean field in Virginia Beach, Virginia.

Now, the university is the fastest growing in the world according to Robertson, who highlighted Regent’s new state-of-the-art cyber range, recently installed on campus in partnership with Cyberbit Ltd. in October 2017.

Robertson also mentioned Regent’s numerous accolades and achievements that have been attained, including the School of Law’s highest bar passage rate in the state of Virginia and this past fall’s record-breaking enrollment of 11,000 students.

But the source of the success, Robertson said, only comes from one thing: trusting and following God. He asserted that we must remain a part of “his plan,” constantly seeking his desire through prayer.

Robertson said he felt that God will grow Regent to the point at which it will have “hundreds of thousands of students,” and use it to shine as a “beacon of hope and light” for the world.

He quoted Jeremiah 29:11-13, “For I know the plans I have for you, declares the Lord. Plans to prosper you, and not to harm you, plans to give you hope and a future. You will call upon me, and come and pray to me, and I will listen to you, and you will see me and find me when you seek for me with all your heart.”

The cosmos, the various galaxies, and the fertility and richness of our earth, testifies to the Lord’s blessing and mercy in not only our lives, but on humanity in general Robertson added.

“Somehow, this is the place he’s [God] sent his son, and all of the universe stands in awe of what’s happening here,” he said. “And the fact that He would listen to us, and that we can pray to him, and we can discern his leading, is a fabulous thing. We listen to God, and he will speak to us, and he will show us his plan.”

It’s an exciting time for the Regent. The university’s upcoming 40th anniversary provides a time for celebration and reflection of God’s blessing throughout the past years and anticipation for what He will do in the future.

“Our destiny and the plan God has for us is to be an influence on every type of discipline, of every type of thought, in this world,” he said. “I think that’s the destiny of Regent.”