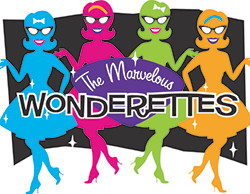 The show features a cast of four bubbling and colorful young women up for prom queen. Together, they sing a musical collection of the classic hits like “Lollipop,” “Mr. Sandman,” and “Lipstick on Your Collar,” as they weave in their stories.

All four of The Marvelous Wonderettes have direct ties to Regent – playing roles in their real lives as current students, alumni or serving on staff. This is a first, according to Harrell, who explained that in the company’s four seasons, the stage has employed more than 50 students at some capacity.

Even the show’s director and choreographer, Derek Martin ’09 (SCA), is an alumnus of the theatre department.

“This is a delightful musical revue with fantastic music and lots of really fun choreography,” said Harrell. “It was a no-brainer to bring someone back of his talent and skill, and he’s a great fit for this show.”

Martin recently completed choreography for a production of Rodgers and Hammerstein’s Oklahoma, but for a revue with bright, spunky numbers, he needed a way to convey a story through the show’s music.

“In [Oklahoma], there were four or five major numbers. Now we’re doing 40. It’s a different animal,” said Martin. “But, it’s been a blast.”

Martin said that for him, returning to Regent to direct the production has been a very “comfortable” and “fulfilling” experience. This is due, in part, to the stars of the production he’s quick to praise.

“They’re willing to do the work, and they want to find depth to their roles and characters, even in something as fun and light as The Marvelous Wonderettes,” said Martin. “And they’re wonderful people, that’s the other thing. They’re passionate about Christ, and they’re lovely to have a conversation with.”