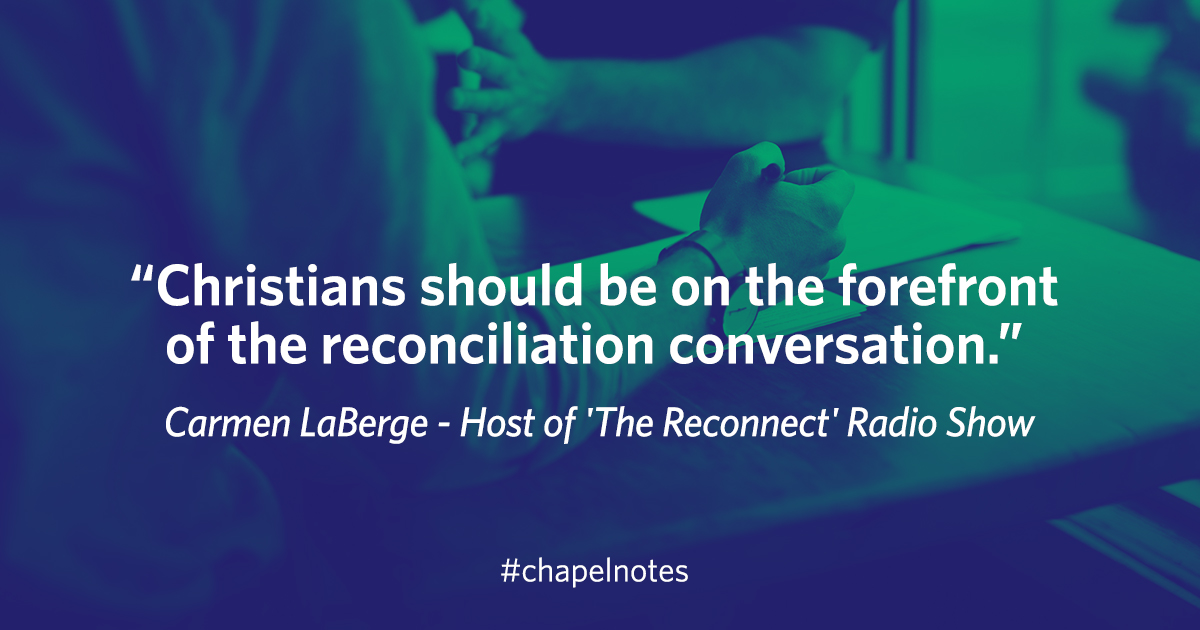 On Wednesday, April 18, Carmen LaBerge, host of the daily Christian talk radio show The Reconnect with Carmen LaBerge and president of Reformation Press, delivered a message on reconciliation — its importance and the obligation Christians carry to preach it — at University Chapel.

Christ compels us to salvation. Having been saved, redeemed, and now His, it’s part of our job, as believers, with identities engrained in Christ, to participate in His redemptive work.

The Apostle Paul lays forth this message in 2 Corinthians 2:15, “And he died for all, that those who live should no longer live for themselves but for him who died for them and was raised again.”

“This life, this mind, this voice, however many minutes, days and years He gives me upon the earth, are his” said LaBerge. “If you are living under the delusion that your spiritual life is some little pie piece of a full life, in which a constellation of other things might also be included, you’re dead in your sins.”

We can only reconcile because we’ve been reconciled.

As citizens of God’s kingdom, we’re “deployed into the kingdoms of this world … to be God’s diplomat … charged with the ministry of reconciliation,” said LaBerge. “Christians should be on the forefront of the reconciliation conversation.”

Christians must preach this message through the example: how they live, how they speak, how they treat others “as transforming agents of God’s grace in the context of the world,” Laberge said. It’s a sermon they constantly preach, whether or not they are aware.

“You need to be prepared for ministry, because wherever it is God chooses to use you in the world … He’s going to want to use you as a minister,” said Laberge. “You’re going to be there, wherever there is, as a minister of reconciliation.”

All reconciliation, said LaBerge, must be done in love.

“That’s how the world is going to know we belong to Christ,” she said. “That we actually love one another in the way that Christ demonstrates his love in self-sacrifice and service.”