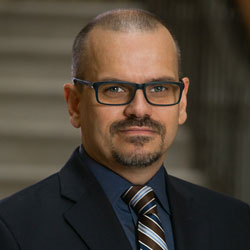 Dr. Corné J. Bekker, dean of Regent’s School of Divinity, will be the keynote speaker for Regent University’s 2017 Commencement ceremony on Saturday, May 6.

Bekker joined Regent in 2005 and was appointed as dean in December 2015. Since becoming dean, Bekker has helped guide the School of Divinity to record enrollment, now surpassing 1,000 students, with a growth rate of nearly 35 percent over the past two years.

He also serves as chair of the Department of Biblical Studies and Christian Ministry in Regent’s College of Arts & Sciences, and previously taught in the doctoral programs of the School of Business & Leadership. He is actively involved in research on the use of biblical hermeneutics and spirituality to explore ecclesial leadership.

Prior to joining Regent, Bekker served as the associate dean for academics of Rhema Bible College in Johannesburg, South Africa. He is an ordained minister and has traveled in Africa, Europe, the East and North America to present at churches, ministries, seminars and academic conferences on the subject of Christian spirituality and leadership formation. He has been an invited speaker to universities, seminaries and Bible colleges in the U.S. and abroad.

In other roles at Regent, Bekker also served as the director for the Quality Enhancement Plan and was the 2010 recipient of the Chancellor’s Award. He resides in Virginia Beach, Virginia with his wife and son.

Approximately 1,600 students will graduate this year, with about 900 of those expected to participate in the ceremony.