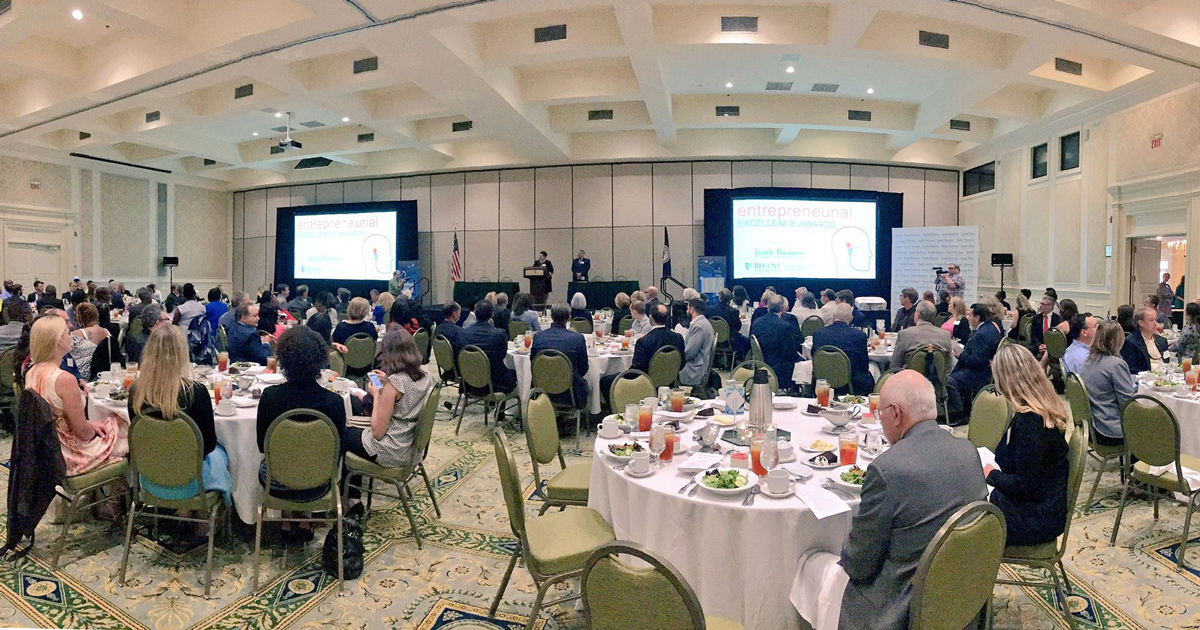 On Monday, June 11, Regent University School of Business & Leadership (SBL) and Inside Business hosted the annual Entrepreneurial Excellence Awards in celebration of the hardworking entrepreneurs on “both sides of the water” of Hampton Roads.

Fifteen honorees, preselected by a panel of judges from various sectors of business, received resounding applause from attendees in recognition of their individual awards.

“It is a joy, truly, to have you all here to celebrate your amazing accomplishments today,” said SBL Dean Doris Gomez. “I know there’s a lot of sweat and tears that goes into a thriving entrepreneurial venture; a lot of uncertainty, a lot of courage.”

“Not only is this a recognition event where we catch entrepreneurs and innovators doing great stuff in the community, [but] we get to write about them,” Inside Business Publisher Mike Herron said. “That’s meaningful content to our community.”

In his address, David Arias, president and former owner of Swimways — a company that sells water toys — talked about his finding successes in business and entrepreneurship.

“I believe that the goal of every CEO, the goal of every company, is to drive profitable growth,” said Arias. “My wiring is that I needed to do more next year than I did this year, so that is the pace that I put our company on.”

Swimways’ annual growth goal, Arias added, was 8-15 percent. Eventually, his company reached the point where he started sharing its financial reports with employees as part of a push to give them a greater sense of ownership over their positions; to give them a tangible idea of how they were making an impact that directly affected and benefited them as employees.

“The failure comes in not recognizing the talent” in one’s company, Harris warned.

“The best advice I ever got: my boss told me to Velcro myself to my customers,” said Oster. “I eventually understood that it meant if you pay very close attention to the wants and the needs of the customers, everything else kind of takes care of itself.”

The panel also encouraged those present to grab ahold of innovative platforms, such as social media, to reach customers.

“You can reach a million people one at a time through social media,” Arias said. “Social media, even though we do it on large scale … [gives us] a touch-point with what we hope to be a lifelong customer.”