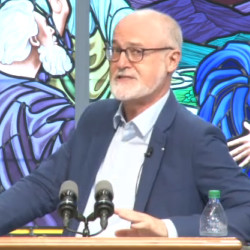 Despite many tragic events that have unfolded in Dr. James W. Goll’s life, he has a message of hope and a song on his lips.

“The best is yet to come,” he said to students, faculty and staff on Wednesday, June 15. Regent University’s Campus Ministries welcomed the renowned writer of 35 books and more than 20 study manuals to a combined University Chapel service with the Christian Broadcasting Network.

“I’ve had bumps and bruises on this rollercoaster ride,” said Goll.

His story starts with a cancer diagnosis – not once, but three times – in the midst of his own battle, his wife was diagnosed with colon cancer.

Suddenly, a man who’d never missed a bill in his life had accumulated $300,000 in medical debt. And he’d lost the only woman he’d ever loved.

“I was filled with pain and sorrow,” he said. “And I fell down, like a tree.”

He depicts his struggles in a narrative form in his book, Finding Hope: Rediscovering Life After Tragedy.

“I suddenly had to answer a lot of questions,” he said. “People began to accuse me of strange things; saying that I must have had something out of order for all of these things to happen in my life.”

He said in that season, he understood the book of Job in the Bible, finding comfort in Job 14:7, which says, “At least there is hope for a tree: If it is cut down, it will sprout again, and its new shoots will not fail.”

Through his personal tragedies, he came to take a look at what he calls the “ABCs” of his life.

“I was asking questions like I was a 20-year-old,” he said. “What do I really believe? Why am I here? What is my purpose in life? Because I almost died four times, people.”

But through his trials he learned that God “prunes” His followers so that they will continue to bear good fruit in their lives.

“I’ve learned that God is good, that all things work for His good,” said Goll. “And that something good is just about to happen.”