“Good to Be in the House of the Lord”

“This isn’t just a collection of buildings,” said Regent University founder, chancellor and CEO, Dr. M.G. “Pat” Robertson. “This is a holy pla 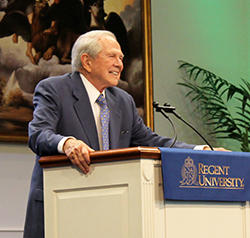 he Arts, School of Divinity, School of Education, School of Business & Leadership, and the Robertson School of Government.

“You’re a part of a miracle,” Robertson said as he reflected on the small, arguably meager, beginnings.

He had just three dollars when he started a brand-new television studio, what he called CBN, Inc. Throughout the process of seeking land to purchase for the company’s expansion, he felt God call him to another calling on top of that.

He remembers hearing God’s voice over a meal of cottage cheese and cantaloupe.

“I heard God say, ‘build a school for my glory,’ and I said, ‘yes sir,’” said Robertson. He started with 142 acres of land bought for $2.3 million dollars, and in 1978, the university began classes with seven professors and 77 students.

Now, on the same property sits a university with more than 8,000 students that, according to Robertson, is one of the fastest-growing universities in the nation.

“God wanted this school, He has breathed on this institution and blessed it,” said Robertson.