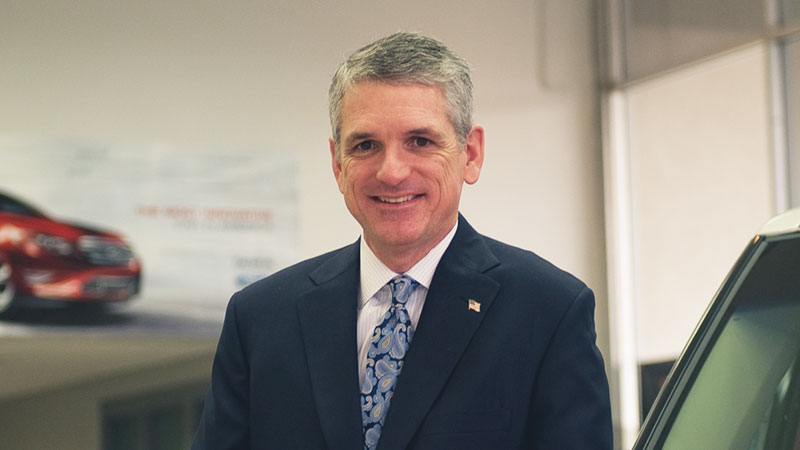 Various leaders throughout history have received credit for this quote, from religious leaders to presidents to human rights advocates. And for good reason. It begs our consideration, for us to stop and contemplate our own place in time and history, and to ask if we are willing to live for something beyond ourselves.

For Scott Rigell (SBL ’90), this question was never taken lightly. As a former business owner, U.S. Marine Corps Reserve veteran, nonprofit advocate, and former representative of Virginia’s 2nd congressional district, Rigell has dedicated his life to serving others and has aimed to set an example by the way he lives his own life.

Born and raised in Titusville, Florida, Rigell followed in his father’s footsteps and served in the U.S. Marine Corps from 1978 to 1984. He then settled in Virginia Beach, Virginia, with his wife Terri. They established and owned Freedom Automotive, which employed more than 190 employees and had a showroom in Virginia Beach and body shops in Norfolk and Chesapeake, from 1991 to 2014.

A love for his community and a strong sense of leadership drove Rigell into the political sphere. But it came with a caveat — if he was going to accept the mantle of leadership, his goal was to put the U.S. on a more successful path, even if that cost him a future election.

“We need leaders who can make difficult decisions that may cost them the next election but are the right decisions for our country,” he stated at the start of his political journey.

Early in his political career, he noticed a disconnect between individual convictions and personal gain. “I just couldn’t get a handle on it. In the workplace it seemed like only profits, or only a selfish ambition was elevated. And then, when I transitioned into seeking public office, I heard: ‘Scott, it’s just politics,’” he reflects.

“They make us believe that to succeed we have to adopt the way the world operates. Regent University rejects that premise.”

Rigell’s decision to campaign came after hearing Governor Mike Huckabee speak about the need for everyone to fight for America and our values. He said in an interview with Regent in 2011, “I thought, what if everyone has the mind-set of ‘No, not me.’ I didn’t come to the conclusion at that moment to run, but I needed to know that I was willing to run.”

The road to Congress wasn’t one that Rigell took quickly. Having first declined the suggestion, it took him years before he finally decided to step into the arena and begin a campaign.

It wasn’t a question of whether he should run for Congress, but rather if he was willing to run. After he and his wife took the time to pray and seek counsel, Rigell traveled to Washington to meet Republican leaders at the National Republican Congressional Committee. On the drive home, he made phone calls for endorsements and to raise money.

There was only one acceptable outcome for Rigell: “We were going to run with every resource we had. We were all in, spiritually and emotionally.”

His willingness to step into a role of leadership has contributed to his accomplishments, both as a successful businessman and as an influential political leader. Rigell won decisively over his opponent in the 2010 midterm election and stayed in Congress for six years. During his time, he provided a solution for the nation’s fiscal challenges and reduced sequestration in Hampton Roads.

He told The Virginian-Pilot in 2016, “I don’t know that there was a stronger advocate for sequestration than the effort I put forward.”

But part of taking ownership is knowing when to step aside. For Rigell his decision to retire came as a deep devotion to his own personal convictions.

Rigell said in an interview with Regent University, “They make us believe that to succeed we have to adopt the way the world operates. Regent University rejects that premise. And though I’m still on this imperfect journey, I’m so grateful for what I’ve learned here.”

In order to make a difference, Rigell believes it begins with the self. He holds an MBA from Regent University’s School of Business & Leadership, which he says not only made him a better political and business leader, but a better husband, father and American.

“It will be the principles of servant leadership that I largely learned at Regent that I’ll carry with me,” he stated in an interview with Regent. “These principles defined me as a corporate leader, and I believe they will define my political leadership.”

Known and respected for his willingness to work across the aisle, Rigell constantly led by example — even when it meant stepping away from politics.

Although he has retired, Rigell is determined to continue his role as a leader in the community: “I care about our community, and I will continue fighting for the things that I’ve been advocating for in Congress and continue to serve this community.”