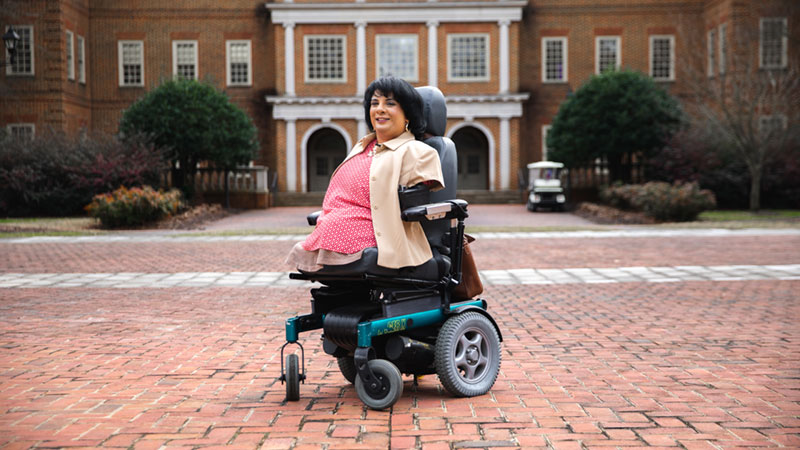 Lisa Olson (SCA, ’99) knows that her life—but for God—easily could have ended before it really began.

She was born in India without any arms or legs in 1974. Though disabled infants were often just left in dumpsters to die, Lisa was dropped off at a Manipal maternity ward in the dark of night. Even so, the hospital’s chief pediatrician deemed euthanasia the best plan until a Christian physician protested to his colleagues that killing the newborn would not only be illegal, but also immoral.

The young doctor personally transported the baby girl to the Ramabai Mukti Mission, 37 hours away, by train and bus. The evangelical orphanage aptly called her Manyata. “My name, in the Marathi language,” she says, “means ‘acceptance.’”

But by the age of 5, Manyata’s physical needs outpaced the care the mission could provide. Doctors suggested that she be transferred to the United States, but as they sought a placement at the Hope Town Christian School for disabled children, India canceled all medical visas. “My only hope was to be adopted by an American,” she says.

Meanwhile, God kept sending a message—ADOPT—to the administrator at Hope Town. Marie Olson pondered the impression for months. The never-been-married, 50-year-old missionary was a special needs educator and nurse but was unclear about the prompting until Hope Town received a letter from the Ramabai Mukti Mission asking if anyone there—maybe Marie Olson specifically—could adopt Manyata. Three months and 16,000 miles later, Marie Olson returned to New York with the bright-eyed Indian preschooler. She renamed her daughter Lisa, meaning “consecrated to God.”

“We all face obstacles in our lives, but I’ve seen His hand and help each and every day.”

Focusing on Her Abilities

Lisa’s new mom, family, and physical therapists quickly discovered that she was a smart, quick-humored, and determined child. They taught her strategies to be as self-sufficient as possible and helped her focus on her many abilities as much as her disabilities.

“My PT was a lot like boot camp,” Lisa says, “but I learned to persevere until I accomplished my goal.” Three goals she’s proud to have achieved are a B.A. in Communications from Lee University, her license to drive a handicapped-accessible van, and an M.A. in Journalism from Regent University. She’s also proud to work for her alma mater as Career Services and Quality Manager at the Robertson School of Government.

“My experience at Regent, as a student and an employee, has been phenomenal!” says Lisa, who takes a ministerial approach to her job. “I love to be able to advise and encourage,” she says. In addition to helping students plan their vocations, she “loves on” her protégés through weekly devotional emails and prays with the students after each appointment. “I want them to have great professional skills, but it’s just as important to have a Kingdom mindset.”

In 2013 Lisa founded Manyata Ministries to help others discover their own acceptance and identity in God. “We all face obstacles in our lives,” Lisa says, “but I’ve seen His hand and help each and every day.” In speaking engagements across the country and abroad, Lisa has shared her inspirational testimony of hope, courage, and overcoming to churches, teens, wounded soldiers, women prisoners, and thousands more.

But even Lisa’s faith flags at times. “I’m a pretty upbeat person,” she says, “yet I’ve struggled with anxiety and depression since I was a teen.” And after her mom died from Alzheimer’s, life’s daily challenges mounted, adding the pressures of arranging reliable caregivers to help with her everyday needs, and how to pay for those services. When she’s tempted to despair, she reminds herself of what her mother always reminded her. “Why worry when you can pray?” she says with a smile. “God is faithful!”

Lisa aspires to serve in full-time ministry, especially to share God’s love with adolescents who face tough times. “I want to speak hope into them and their futures. God still has a purpose for their lives”

She also dreams of returning to India with the doctor who rescued her – and a camera crew—to make a documentary of the miraculous voyage that saved her life and, she hopes, others’ to come.

“Never give up! Always persevere and know that God has a great plan for your life,” Lisa says. “With Him, all things are possible!”