From Homelessness to Law School 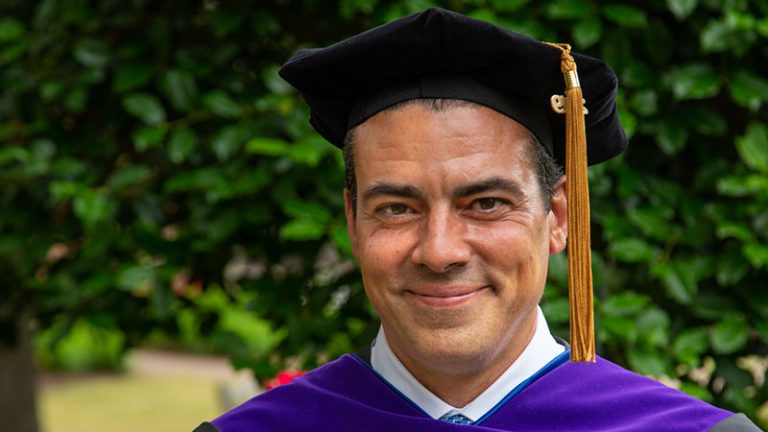 By Shreya Shukla Tho

He grew up in a Christian home in Iowa and went to a Christian college. While he had considered going to law school, he pursued a career in sales instead, attracted by the prospect of making “more money faster” at the time. Addink got married and was blessed with five children. But, in 2009, after a divorce, he experienced severe depression and struggled with alcoholism. By January 2014, Addink had become homeless in Omaha. In March 2014, he went into a homeless shelter and joined its drug and alcohol rehabilitation program. Seeds of restoration were planted.

“(I) just got busy trying to make life work on my own … it just didn’t go very well,” says Addink of some of the most difficult moments of his life. But it was at the shelter that he decided to submit to God. “I said, “I don’t know where else to turn, God; I need your help, and I give my life to you.”

After getting out of rehab and the homeless shelter in November 2014, Addink landed a job in sales with a company in Omaha. Providentially, the company also had a branch in Pittsburgh, where his ex-wife and children now lived. So when a position became available there six months later, the company helped Addink move so that he could be close to his kids.

Soon after, another door opened unexpectedly. Addink’s aunt contacted him out of the blue and asked if he ever still thought about going to law school. If he did, she told him, she and her husband would be willing to sponsor him for it. And so began applications to law schools in Pittsburgh, as well as to Regent Law in Virginia Beach.

Just as unexpectedly as the door opened, it also closed – or so it seemed. A month after Addink’s aunt called him, she developed a rapid onset of Alzheimer’s disease and passed within a matter of weeks. She hadn’t told anyone about her desire to help him with law school.

Without funding for a law degree, Addink was ready to give up on his dream. Then, Regent contacted him. They wanted to consider him for the honors program and a scholarship, he was told. The scholarship was a full ride. “All right, God; I guess this is your answer. I’m going,” said Addink.

The move was difficult, as it involved moving away from his children. In the long run, however, Addink feels that it actually strengthened his relationship with them because they did a lot of FaceTime calls and he came to Pittsburgh every month to spend time with them. “We have a great relationship now that I’m back in Pittsburgh again,” he says.

An Answer to Prayer

At times, God lets us view the lifecycle of prayer from beginning to end, Addink learned throughout his journey.

For his parents, that moment occurred on the Regent and Christian Broadcasting Network (CBN) campus in Virginia Beach. They visited their son during his first semester in law school; when he had to attend a class after their campus tour, they decided to continue exploring the campus themselves. They entered the CBN building and were prompted by the receptionist to look at pictures of the ministry’s history on the second floor.

While looking at these photographs, it suddenly dawned on Addink’s mother that, years earlier, she had prayed for her son with a CBN prayer counselor. It was around the time that Addink was homeless that CBN had called her, a sponsor of the ministry, asking if she had any prayer requests. “And the one and only time that she actually took them up on that was for her to pray for me … that God would save her son,” says Addink.

““And then I just got chills,” she told her son, ”because I realized that, not only did God reach down and grab you, but He took you to law school at the very place where the people I had prayed with for God to save you are located.”

Addink was among the six outstanding graduates invited to speak at the 2019 Chancellor’s Luncheon. His parents attended both his graduation ceremony and the luncheon thereafter and were thrilled to hear their son share his testimony. 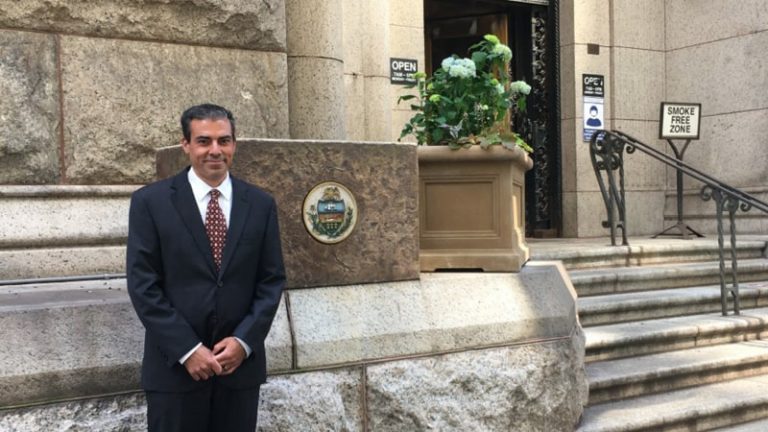 Another part of his story is the new chapter of marriage. A month into law school, Addink started driving Uber – something he had done a couple of times in Pittsburgh – because Pennsylvania had levied his bank account to help pay back child support. Around the same time, a friend he had met at an AA meeting was dealing with a car totaled by flooding, thanks to Hurricane Matthew. Addink began driving her to work and back, and it was during these Uber rides that the two began to click.

“So, had Pennsylvania not drained my bank account and had Hurricane Matthew not destroyed her car, we may not even be together today,” says Addink with a laugh. They were married in 2018.

Today, Addink serves as associate district attorney at the Allegheny County District Attorney’s office. After gaining experience with the district attorney, he’d like to be part of a practice where he can focus on people with legal problems as a result of alcohol and drug use. In addition to being a counselor for their legal affairs, Addink would like be in a position to connect them to strong rehab programs and employers who are willing to give a chance to a person who is trying to stay sober and rebuild their life.

“For a lot of people, the biggest challenge for addictions is denial. There’s a brief window of time after someone catches a charge where they’re generally open to the idea of making a change,” says Addink. “I think that would be a great time for me to come in and be able to say, ‘Hey, I know exactly where you’re at. I’ve been there; here’s where I’m at today. You could turn your life around too.’”

And though he doesn’t know if or when this will happen, he’s following God’s lead. “When He lays something on my heart to do, I’ll go do it,” says Addink. In this case, as before, it will be a matter of saying “yes.”