For Mark Batterson (DIV, ’12), one point is very clear: “If you want to reach people no one is reaching, you have to do things no one is doing.” The pastor and author, turned a former crack house into the largest coffeehouse on Capitol Hill and an abandoned apartment building into a community center. “There are ways of doing church that no one has thought of yet,” he said. For him, the journey has been an answer to prayer.

On January 6, 1998, Batterson was sitting in a Doctor of Ministry class at Regent University when he got called out of class to take a phone call.

“Nothing can prepare you to hear the life-altering words that you’ve lost a loved one,” Batterson said.

His father-in-law and spiritual mentor had unexpectedly passed away from a massive heart attack just two days following his 55th birthday. Ironically, it also happened to be two years to the day that Batterson held his very first service as pastor of National Community Church (NCC) in Washington, D.C. with only three people present—Batterson, his wife Lora, and their son Parker.

As he stood at the foot of the casket of his father-in-law—a man who had planted and pastored a church for 31 years and who was the inspiration behind Batterson’s dreams of pastoring—he asked God for a double portion of his spirit.

“I knew I needed his anointing if I was going to honor my father-in-law’s legacy,” Batterson said. “So I asked God for a double portion not unlike the prophet Elisha, who asked the same of his prophetic mentor Elijah and went on to perform exactly twice as many miracles as he did.”

Two decades later, Dr. Mark Batterson’s way of doing church and ministry is a testament to the prayer he prayed that day—and the subject of his latest book, Double Blessing, whose premise is simply: we are blessed to bless. 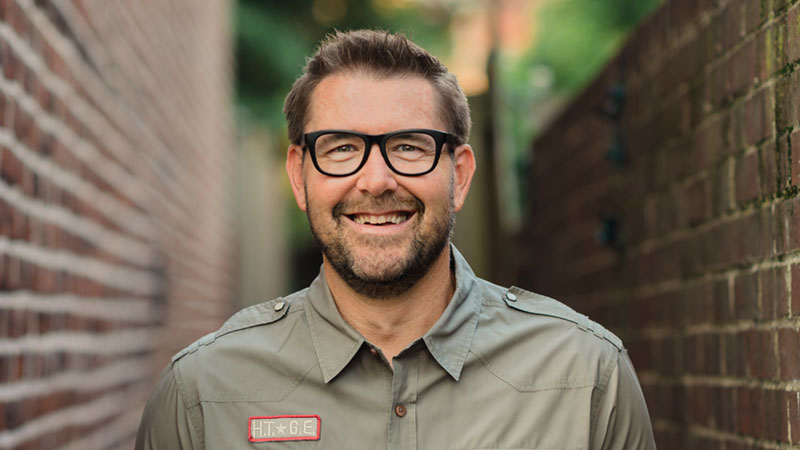 “If you want to reach people no one is reaching, you have to do things no one is doing.”

As Batterson explains, we flip the blessing by blessing others in the way God has blessed us. That’s the double blessing and the means by which we can experience an exponential impact.

Exponential impact, indeed. In his twenty plus years of ministry, Batterson has proven the magnitude of what can happen when you bless others.

What began as a church of three, NCC has now grown to seven locations across the D.C. metro area reaching thousands every week and was recognized in 2008 by Outreach Magazine as one of the Most Innovative and Most Influential Churches in America.

Their Ebenezers Coffeehouse, the largest on Capitol Hill, has served “coffee with a cause” to more than a million customers to date while donating 100 percent of the profits toward local and international community outreach projects.

In the summer of 2016, they opened the DC Dream Center, a once abandoned apartment building turned multi-million-dollar community center, which offers programs such as after-school activities, tutoring, personal development, legal assistance, and more to youth and adults in need.

Currently on the docket, NCC is redeveloping a city block (named The Capital Turnaround) located at the intersection of the Capitol Hill, Navy Yard, and Riverfront neighborhoods, which will be a mixed-use space, including event venue, child development center, marketplace, and co-working space.

All of these efforts and initiatives represent NCC’s core convictions that the church is to be creative, that it belongs in the middle of the marketplace, and that God will bless the church in proportion to how they give to missions and care for the poor in their city. “A church that stays within its four walls isn’t a church at all,” Batterson said.

To suggest that Batterson’s influence has extended beyond the four walls of his church would be an understatement. In addition to being a full-time pastor and sought-after conference speaker, he is also a New York Times best-selling author of 18 books, with his book, The Circle Maker, selling over a million copies to date.

“I feel as called to write as I do to pastor; I love both of those things,” he said. “I have the privilege of having a hands-on influence with several thousand people on a weekly basis through the church but writing enables me to influence far more people.”

Batterson also holds a Doctor of Ministry (D.Min.) from Regent University, which he says has helped hone both his writing and leadership skills.

“A lot of my academic background at Regent helped lay a foundation for my writing,” he explained. “But it was the beginning stages of the D.Min. program that really helped define my leadership gift and lay a foundation for what the Lord’s done and what He’s going to continue to do hopefully over the next 30 years.”

Which according to Batterson, is to bless.

“I thought this (Double Blessing) was a book about the art and science of gratitude and generosity. I thought it was about flipping the blessing as a way of life. And it is,” he said. “But it’s also about rediscovering God’s heart for you. Blessing is God’s default setting. God wants to bless you beyond your ability to ask or imagine.”