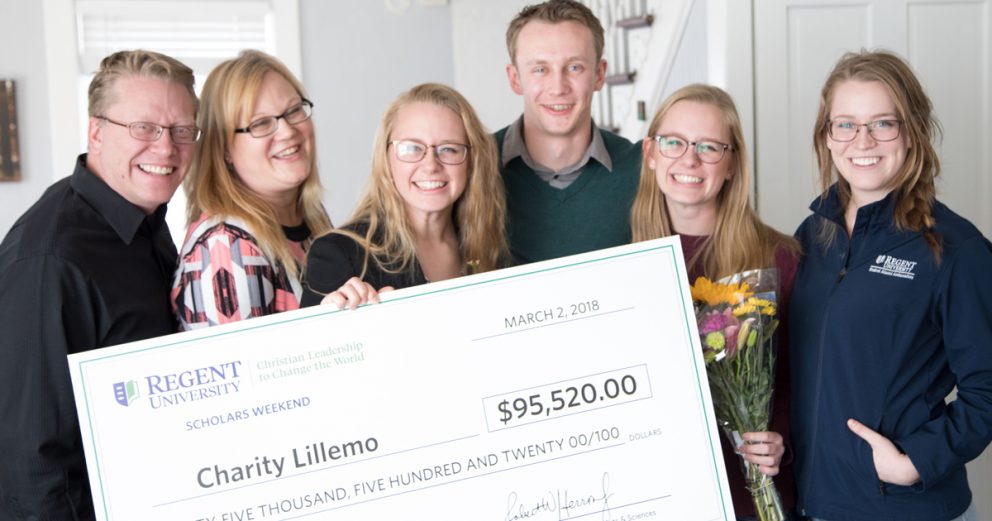 Any observer would be hard-pressed to find similarities between the town of Haymarket, Virginia and the lobby of Regent University’s Divinity building. However, for two days in a row— Thursday, March 1, and Friday, March 2 — each was the site of a special surprise for two future Regent students.

Melvin came to the Divinity building under the impression she’d be interviewing for a scholarship. Initially posing as visitors to Regent’s Virginia Beach, Virginia campus, staff occupying the building’s lobby, gave Melvin a full-tuition scholarship amidst a flurry of cheers and confetti.

“We look for folks that demonstrate integrity, innovation, and excellence at every turn of their lives, and that also have a strong commitment to furthering God’s kingdom,” said Habib. “She [Melvin] has demonstrated above and beyond what we’re looking for.”

“I had a wonderful time during Scholars Weekend, and I’m just so thrilled that I can end it with such a reward and knowing that God has a plan for me that I don’t even know about yet,” Melvin said. “I’m excited to see how that turns out.”

The next day, enrollment staff accompanied by Avery Walsh, director of traditional undergraduate admissions, travelled to Haymarket, Virginia, and awarded Charity Lillemo the Dean’s Scholarship — a scholarship that won’t just cover her tuition, but also her housing during the four years she spends studying at Regent.

Lillemo, like Melvin, was under the impression she was only a scholarship candidate, not recipient.

“I am so excited to be able to go to Regent University,” said Lillemo, and added she’s not only grateful for this “blessing and opportunity,” but aspires to eventually attend medical school and bring her knowledge and skills to people in need of it, particularly those in foreign countries.