Teaching Students to Be Lawyers Unto Others, Not Themselves 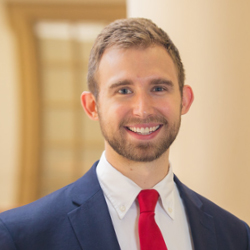 Teaching has always been on the horizon for Regent University School of Law professor Caleb Griffin.

He joined LAW faculty Fall Semester 2016, after receiving a phone call from professor and associate dean, Natt Gantt, who was seeking interested candidates for the position.

“I was at work one evening and he called and asked if I was interested in being a law professor, and I really was,” said Griffin. “I was literally called to work here.”

Griffin came to Regent after graduating from Harvard Law School in 2014, and a stint of practicing corporate law at the firm of Vinson & Elkins, representing organizations such as banks and oil companies.

“Practicing law is great, and I learned a lot, but I find it so rewarding to be able to work with students and examine deeper questions about the law,” he said.

His true passion lies in helping students conduct research and think about the “bigger issues” of law. He explained that those who practice law for a living don’t always have the privilege to study the history of a law or how it came to be.

“Is it the best law? Should it be this way? Is it moral?” asked Griffin. “That’s not your job when you’re representing a client.”

For Griffin, returning to the classroom has been, in part, a return to theorizing the law. At Regent, he encourages his students to conduct research and to think about the “bigger issues.” And to his delight, they respond with “wonderful and unique insights.”

“It’s both incredibly fun, and incredibly rewarding. It’s something that I feel is a really good and exciting opportunity,” said Griffin. “It’s great to be in the classroom to learn and to get to interact with the students – I’ve been surprised by how energizing it is to be in a classroom and get questions from students.”

Apart from teaching, Griffin said he enjoys being among his Christian colleagues. To him, they represent a body of people who believe in something outside of themselves. Together they work toward a common mission and purpose: to guide confident Christian lawyers.

That, in turn, is what he believes sets apart Christian lawyers who work in a secular market.

“You can definitely tell who’s being honest and forthright when they’re practicing law and who is treating others better than themselves,” said Griffin. “That includes the client and the people who are working across the table from you.”

He sees his work as fulfilling a unique calling on his life, and explained that his goal as a professor is to help his students find the right motivations and perspectives when it comes to navigating legal issues from a Christian perspective.

“God endows us with a variety of gifts. Some of us are preachers and ministers and some of us are business men and women. But we’re all called to do work so that we have something to share with those in need,” said Griffin. “And I think [practicing law] is an important way to do that.”