Community invited to attend a celebration of life service on Friday, June 14 at the University Chapel 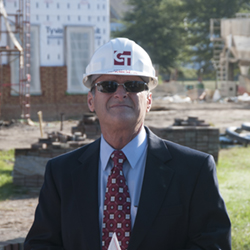 During his 20 years with the university, Jemiola built a legacy, quite literally, throughout Regent’s Virginia Beach, Virginia campus. He not only oversaw the management of the university’s facilities, but his work and dedication to the mission and vision of the university is evidenced by his execution of several of the buildings standing on campus today.

Jemiola’s loyalty and dedication to the school was apparent behind the scenes as well. Throughout campus emergencies, power outages and storm damage due to inclement weather, he was often one of the first to arrive to ensure that on-campus residencies, buildings and roadways were all clear before reopening to students, faculty and staff; at times risking his own safety to ensure the wellness of others.

His expertise in multiple areas saved the university hundreds of thousands of dollars in contractor, electricity and maintenance costs – but his most valuable asset was his character … markings of true servant leadership.

“We are saddened by the passing of our dear brother,” said Regent University founder, chancellor and CEO Dr. M.G. “Pat” Robertson. “Rich joined Regent University after retiring at the rank of colonel from a distinguished career in the U.S. Army Corps of Engineers. He was a valued member of our executive team and worked diligently overseeing the management of university facilities. Words fail to express the gratitude Regent has toward Rich.”

Jemiola’s dedication and loyalty to the greater good undoubtedly stemmed from his 26-year career in the U.S. Army. Throughout his military service he was awarded several distinctions, including the Legion of Merit, the Bronze Star, and the Meritorious Service Medal.

Prior to beginning his tenure at Regent, he served one year as Secretary of Transportation for the State of West Virginia (1997-1998).

“I am deeply saddened by the loss of our dear colleague and friend, Rich Jemiola,” said Regent Executive Vice President for Academic Affairs Dr. Gerson Moreno-Riaño. “His exemplary service to our university and excellence in spirit will be greatly missed. Our thoughts and prayers go out to his wife, Irene, and their two children, Michelle and Ricky, during this difficult time.”

Join Regent University as the community celebrates Jemiola’s life on Friday, June 14 at 11 a.m. in the University Chapel.