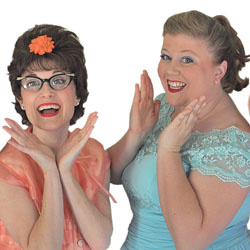 From prom dresses to Rorschach inkblot tests, Tidewater Stage, Regent University’s professional theatre company, has much to offer its audiences.

June 2016 marks the beginning of the fourth season of Tidewater Stage performances, featuring the jukebox musical revue, The Marvelous Wonderettes (June 17-19 and 24-26); and the dueling worldviews of C.S. Lewis and Sigmund Freud in Freud’s Last Session (July 29-31 and Aug. 5-7).

This show features the musical storytelling of four females along the backdrop of famous songs from the 1950s and ’60s.Theatre-goers of this performance will take a walk down musical-memory lane with songs such as Lollipop, Lipstick on Your Collar and Stupid Cupid.

As for the season’s play, Harrell admits that Freud’s Last Session is “unique” in comparison to the more comedic titles the company has produced in the past. He’s excited to see what the performance will have to offer audiences in terms of a faith-discussion.

“[Freud’s Last Session] has a tremendous amount of humor, it’s actually quite funny in many, many places,” said Harrell. “But it’s also a challenging look at some provocative issues. It has a lot to offer in terms of an examination of one’s faith.”

According to Harrell, the show is laced with powerful revelations of truth both within the context of two very differing worldviews as it depicts the fictional meeting of the atheist, father of psychoanalysis and the beloved Christian author.