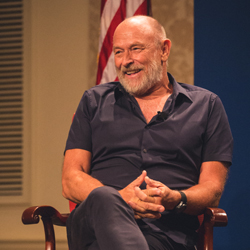 Many classic Hollywood films start with a challenge, an inciting incident in a main character’s life.

For actor and president of Home Theater Films, Corbin Bernsen, life turned a corner as he held a Ziploc bag of father’s ashes. Bernsen spoke with business leaders of the Hampton Roads community at Regent University’s Executive Leadership Series (ELS) on Friday, September 10.

Though he’d already seen success in his life from his roles on shows such as L.A. Law and Psych, after his father’s death he wrote his first faith-based film, Rust. The film followed the story of a pastor who loses his way – loosely inspired by events in Bernsen’s life.

“It was completely under the direction of God,” said Bernsen, who recalled shooting the film in negative-47-degree-weather, in a small city in Canada, with amateur actors. “That film was miracle after miracle,” said Bernsen.

From the provision of battery warmers for his film equipment and seven buildings to choose from for a house-fire scene, Bernsen began to think his film was “blessed.”

And when he discovered that the house they chose for the scene belonged to an infamous kidnapper, and one of his many underage victims was there to witness the scene of the crime burn to the ground, he knew it.

That, in a way, is what draws Bernsen to storytelling in the first place: humanity, and the stories that lie within. The stories he tells may not be conventional, they may even raise a few eyebrows within the Christian community, but he tells them. His concept of faith-based films being:

Bernsen said that most of the inspiration for the films he writes, directs and produces come about because of his four sons, who don’t share his faith. And to him, they’re representative of a larger group in the world.

“My son didn’t become a carpenter like me because I told him to,” Bernsen explained. “He came in and helped me, he picked up the tools. I just kept the garage door open. I don’t carry the burden to change people, I let God do the heavy lifting.”

Bernsen strives to lead his life as well as his various pursuits within the film industry with his number one leadership “barometer”: truth.

“All these lessons on leadership I learned from my parents,” said Bernsen, whose mother was longtime The Young and the Restless star, Jeanne Cooper. “It’s learning to delegate, respect, and giving someone space to put their stamp on a project.”

Bernsen explained his love for his wife and his family above all, and many times, he explained, it’s their love that drives the very passion for what he does every day. “I love what I know, I love what God gives me,” said Bernsen. “And I share it with other people.”

Bersen’s most recent story he shared, co-produced by his company Home Theater Films and Regent’s School of Communication & the Arts, is In-Lawfully Yours. It follows the story of a young woman named Jesse (Chelsea Crisp), rom-com re-telling of the biblical story of Ruth and Boaz.

The film will premiere on Regent’s campus on Saturday, September 10th.

“It’s my favorite film that we’ve done, and I didn’t even write or direct it. What you’ll see in this film is not just a result of myself, my business partners and the professional actors – it’s really what the kids did,” said Bernsen. “And anyone associated with the university should be really, really proud.”

The next event in the ELS series will continue on October 25, and will feature Colin Bloom, director of outreach and international secretary of the United Kingdom Conservative party.