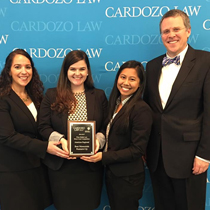 Pamela Dodge (’17), Courtney Marasigan (’17), and Kate Sawyer (’17) represented one of 44 teams that qualified for the international round of the competition, and the initial 92 teams that began the tournament in the regional rounds from around the world.

Regent’s team was the only one from North America to earn their way into the international rounds after taking home the second-best brief in the Western Hemisphere in January 2017 at the Americas Region of the Price Media tournament in New York City.

“[The team] did an outstanding job. They performed at the highest level and got increasingly stronger as the tournament went on,” said LAW professor Jeff Brauch “They also represented Regent and Christ with excellence, dignity and good sportsmanship. It was a joy to coach them – and also spend time with them in England. I was honored by the opportunity.”

Dodge, Marasigan and Sawyer worked many long hours preparing for the competition. On top of achieving an impressive performance in the competition, the three agree that they’ve made lifelong friendships with one another, and nod to Brauch’s wisdom and encouragement as “instrumental” to their success.

“The competition was definitely a lot of work,” said Sawyer. “But it was my best experience in law school.”

Marasigan agreed, and said she’s always believed that participating in competitions is one of the times she has felt God’s presence in her life the most.

“Throughout each competition day – literally from early hours in the morning until late at night – the team received texts and Facebook messages from family, friends, professors and classmates,” said Courtney. “It’s really special to be able to experience such a huge outpouring of love, support and prayers.”