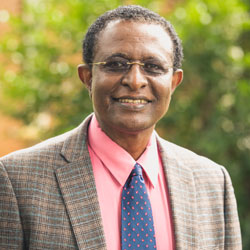 Mekonnen hails from the African nation of Ethiopia. While there, he worked with Reach Global, then referred to as Evangelical Free Church of America International Mission, from 1997-2005.

Although he’s faced resistance for his faith overseas, Mekonnen has never ceased to boldly proclaim the truth of the gospel.

While at Regent, he’s played a key role in developing the School of Divinity’s mission emphasis for the M.Th., M.A. and M.Div degree programs.

In his sermon, he urged students to carry God’s word into the world — one in which vast amounts of people have abandoned the gospel and embraced secular ideologies and systems of thought and belief.

He cited author Michael Green, who points to the enlightenment as a key issue. “We have uncritically accepted the assumption of the enlightenment,” read Mekonnen. “[It] has beguiled us into giving all our explanation in terms of cause and effect while neglecting the concept of purpose.”

Mekonnen then quoted American author Ernest Hemmingway. He believed the quote epitomizes the spirit of the enlightenment: “Life is just a dirty trick; a short voyage from nothingness to nothingness.”

“When you have that sort of perception about life,” said Mekonnen, “and you have no purpose and goal to live for, it’s not really difficult to predict [how] society will end up.”

Converting to Christianity contrasts the ideology to the enlightenment because not only is it a process in which one must die to themselves and their pride, but is one in which individuals find purpose in God’s call on their life, he said.

Mekonnen expounded: “It’s not an emotional feeling, it’s a total transformation of the mind … when we deny ourselves, we find our true self in Christ.”

Mekonnen also said that poor communication hinders believers from sharing God’s word. Even those who grasp proper theology are ailed in their attempts to do so; in short, bad communication limits effectiveness and opportunities.

Rather, communicators should work to learn the most effective way to share messages with people in other cultures, he said.

In the end, however, a person’s efforts to share the gospel are futile if they don’t wholly embrace the Bible and preach a gospel message that is not only doctrinally and scripturally sound, but most importantly, points to Christ as the only means to salvation.

“Ignatius, Clement of Alexandria, Augustine of Hippo, Martin Luther the reformer, they remembered this gospel and imparted [it to] their generation,” he said. “It’s our responsibility, in this generation, to remind the students and the people that we serve, that this gospel is a gospel of Jesus Christ.”