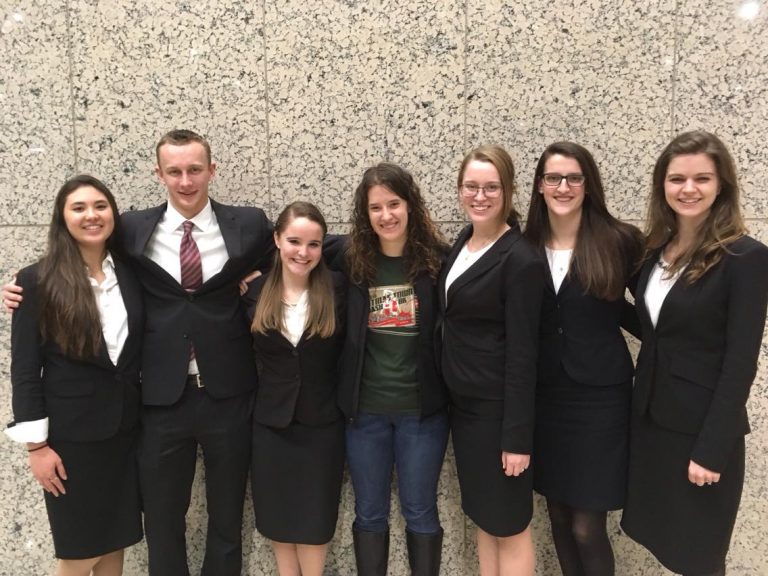 During the American Moot Court Association (AMCA) national tournament, hosted in Dallas, Texas, at UNT Dallas College of Law from January 19–20, all three RUDA teams made it to elimination rounds. Never before have all of RUDA’s teams gone so far in nationals.

Although they were all knocked out in the eliminations rounds, they fought hard against difficult odds. In total, 404 undergraduate moot court teams compete around the country. Of those, 80 made it to nationals. Three of those were RUDA teams.

Samuel Lillemo ’19 (CAS) likened the experience to being amidst “intellectual giants.”

“Moot Court was more than an exercise in debate and rhetoric — it was dozens of nights conquering failure, hundreds of opportunities to face fear, and thousands of tiny challenges to rise up,” he said. “I walked away far more blessed to have grown as a person.”

Although Lillemo and his teammate, Kana Turley ’21 (CAS), were knocked out by a team defending their title as national champions, Lillemo said he and Turley “left proudly knowing we had fought hard.”

When she was told all RUDA teams were moving on to elimination rounds during the tournament, Turley said she was “too full of joy and gratitude” to worry about the opposing teams.

Jessica Wollum ’18, another RUDA competitor, said it was a “blessing” to watch her teammates compete.

“Judge after judge kept complementing our teams by saying that we were competing with skills that many first-year law students are struggling to develop,” Wollum said. “[It] is a testament to my teammates’ and my [own] persistence and our coaches’ hard work.”

Because of the teams’ outstanding performance and accomplishments, Regent’s moot court program will rank 4th nationally.

“I am so incredibly proud of this team. We all worked so hard all season, and it was so rewarding to watch this team make Regent history three different ways,” said Alexandria Cross ’18 (CAS) who was recognized as 5th best orator in the national tournament. “From a personal and team perspective, I could not have asked for a better end to my moot court career than this nationals competition.”