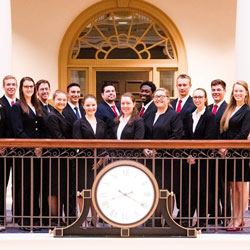 On Friday and Saturday, November 10-11, Regent University’s Undergraduate Debate Association (RUDA) put on an impressive performance at American Moot Court Association’s regional tournament hosted by Regent University’s School of Law. One of the RUDA teams made it as far as the quarterfinals, and claimed another victory over Patrick Henry College in the tournament final.

In January, the finalist and quarterfinalist RUDA teams will move on to compete in the National Moot Court Tournament in Dallas, Texas.

Regent’s teams competed against 43 others from Virginia colleges and universities, including the University of Virginia and the College of William and Mary.

“Being involved in Moot Court is easily one of my favorite aspects about Regent,” said Jessica Wollum ’18 (College of Arts & Sciences). She and teammate Hannah Lillemo ’21 (CAS) won the final round. “I have competed for three years and grown so much — as a person and an advocate — by learning more about how to read court cases and how to effectively defend my stance.”

Wollum said the experience gave her a greater confidence to pursue attending law school, and praised the team’s coach and Regent University School of Law adjunct professor Jess Krentz, crediting their success to Krentz’s “encouragement” and how she points the team members towards the example of Christ.

In addition to successful teamwork, individuals within the team received recognition for their stellar work and performance.

“I was incredibly proud of this team and how hard they worked all season long to represent Regent so well,” said quarterfinalist Alexandria Cross ’18 (CAS). Although it was Cross’s last time competing in regionals, she expressed she, “was blessed to spend my senior year with such a dedicated, fun-loving group of competitors.”

She added, “I am immensely proud of everyone who has contributed to the continuing legacy of excellence and success in this program.”