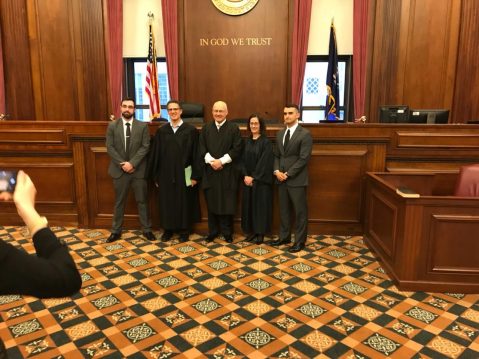 Out of the 36 teams from across the country that competed in the competition, Regent LAW’s team — Nathan Hernandez ’20 and Joshua Barbosa ’20 — claimed victory in the final round of the competition.

“The final round was probably the most exhilarating experience I have had during my time at Regent Law,” said Hernandez. He received the Best Advocate Award for his strong performance.

“Although winning the competition was the destination and the “cherry on top” so to speak, it was the competition as a whole and the journey in preparing for it that was the most worthwhile aspect of the experience,” he added. “Being able to compete for Regent has been a privilege and an honor.”

“The high standard set for oralists in Regent’s moot court program most certainly allowed Nathan and I to stand out from other talented oralists,” Barbosa said. “The preparation that we were given by our coach, fellow board members, and other outside attorneys was invaluable as there were very few questions at competition that we had not already heard.”

The competition, named after Herbert Weschler — a key figure in drafting the Model Penal Code — is “the only national moot court competition in the United States to focus on topics in substantive criminal law,” according to the University at Buffalo School of Law. The panel of judges provided a breadth of professional, legal expertise, and included a federal judge from the Western District of New York, an associate justice of the New York Supreme Court Appellate Division, and a constitutional law professor from the Buffalo School of Law.

Although it was the first time Regent LAW’s moot court team participated in the competition, Michael Hernandez, LAW professor and coach of Nathan Hernandez and Joshua Barbosa’s team, says Regent LAW teams are likely to return.

“Josh and Nathan worked very hard to master their craft and represent the school and Lord with excellence,” he said. “To have beaten such stellar teams, including ones from Ohio State, American, and Southwestern, reflects the quality of our academic, writing and moot court programs.”