VIRGINIA BEACH, VA (May 28, 2020) – Regent University School of Law is pleased to announce the highest employment percentage in the school’s history – landing at 95% for the class of 2019. This percentage is based on the National Association for Law Placement (NALP) 10-month employment calculation. Additionally, a record-breaking 24.6% of 2019 graduates secured judicial clerkships – the highest clerkship rate in Virginia.

“Regent University School of Law is deeply committed to equipping lawyers to make a positive impact in the legal profession and in our society,” stated Regent Law Dean Mark Martin, former Chief Justice of the Supreme Court of North Carolina. “Achieving this employment rate is a huge win for our law school and, most importantly, our graduates.”

Regent Law students receive extensive instruction in black-letter law and practical skills training under the leadership of prestigious faculty members. The rigorous academic program is uniquely integrated with a Christ-centered mission and commitment to first principles of law, including the Western Legal, Common Law, and American Constitutional tradition.

The American Bar Association defines Employer Categories, and employment percentages are based on the type of employer of those employed. Regent Law’s employment rates are as follows: 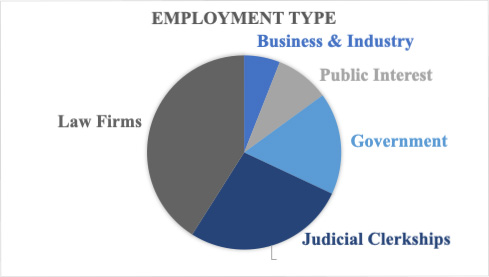 Nearly 60 Regent Law graduates have served as judges around the nation, including the Supreme Court of Wisconsin, Alaska Superior Court, Florida Circuit Court, and other circuit, municipal, and district courts. Many are defending First Amendment rights with organizations like Alliance Defending Freedom, the American Center for Law and Justice, and the Becket Fund. And many other Regent Law graduates are making a difference in the private sector, academia, and government.

Regent Law also holds a remarkable 2019 clerkship rate of 24.64%. This the highest percentage among law schools in the Commonwealth of Virginia.

“Regent students are prepared to secure competitive clerkships because of our professional support and counseling, our resources, and our reputation with judges,” said Martin. “Most of all, this reflects the hard work of our students and, again, the rigor of our program.”

Regent Law’s more than 3,300 graduates practice law in 49 states and over 20 countries and include 38 currently sitting judges. The School of Law currently ranks in the top 25 percent of all law schools for obtaining judicial clerkships and ranked 20th in the nation for Ultimate Bar Passage in 2019. The school offers the Juris Doctor (J.D.) in three-year and part-time formats, an online M.A. in Law, an online M.A. in Financial Planning & Law, an on-campus and online LL.M. in Human Rights and an on-campus and online LL.M. in American Legal Studies.

Founded in 1978, Regent University has nearly 11,000 students studying on its 70-acre campus in Virginia Beach, Va., and online around the world. The university offers associate, bachelor’s, master’s and doctoral degrees from a Christian perspective in 135+ program areas including business, communication, the arts, divinity, education, government, law, leadership, nursing, healthcare, and psychology. Currently, Regent University is ranked among top national universities by U.S. News & World Report and is one of only 23 universities nationally to receive an “A” rating for its comprehensive liberal arts core curriculum