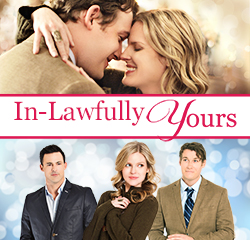 Regent University will celebrate the release of its first-ever commercially produced feature film, In-Lawfully Yours, on Tuesday, Sept. 6, on Netflix, DVD and Digital HD. The romantic comedy based on the biblical account of Ruth was produced in partnership with Home Theater Films, owned by veteran Hollywood actor, Corbin Bernsen (LA Law, Psych).

The making of the project itself was a feather in the film-cap for Regent’s School of Communication & the Arts (SCA) students – some 80 involved in the project, ranging in roles from assistant to the producer, production coordinator to casting assistant.

Saturday, September 10, Regent’s Office of Alumni Relations & Special Events will host a free on-campus premiere with special guests who made their appearance in the film, at 7 p.m. in Regent’s Dede Robertson Theatre.

“Our students were delighted to work with the consummate professionals on this project. The producer, actors and crew modeled professionalism, which was so appreciated by those of us at Regent,” said SCA dean, Dr. Mitch Land. “What a wonderful opportunity to work with Corbin Bernsen, director, Robert Kirbyson, producer, Chris Aronoff, and their team via Home Theater Films to co-produce this delightful romantic comedy.”

SCA’s involvement with In-Lawfully Yours didn’t end with students, however. According to Land, two SCA faculty members make cameos in the film. Further, the screenplay was written by SCA professor, Sean Gaffney.

The story was first developed more than 10 years ago, from a challenge Gaffney gave to a group of students. Their mission was to modernize a classic literary story into a film or television piece. In-Lawfully Yours follows the story of a young woman (Chelsey Crisp), who leaves New York City to help mother-in-law (Marilu Henner) transition into widowhood.

“And if [audiences] expect a traditional, Christian drama, that’s not what they’ll get,” said Gaffney.

Land explained that while the film is, indeed, faith-based, it’s not “overly sentimental,” a trait of the project he appreciates.

“It focuses on broken and hurt lives and does so with humor and empathy,” said Land. “It demonstrates that with God, we still get second chances at happiness.”

Learn more about Regent University’s School of Communication & the Arts and the In-Lawfully Yours premiere.