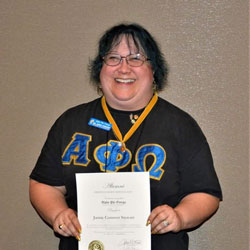 The room in Austin, Texas, was packed and buzzing with energy during the Alpha Phi Omega’s (APO) 45th Biennial National Convention.

As the award ceremony — during a conference that’d stretched from December 27-30 — wound on, Regent University alumna Jamie Stewart (SBL ’10, SOE ’17) sat at her table, relishing all of it. A veteran member of the fraternity for over 30 years, she’d already received eight awards for her service to the organization.

On December 29, during the alumni luncheon, APO’s National Alumni Relations Chair announced that it was time for the fraternity to bestow the National Alumni Distinguished Service Key (NADSK) on a member.

The NADSK is one of APO’s most prestigious awards and “recognizes those alumni who have continued to further the principles of Leadership, Friendship and Service beyond their college years in exceptional ways.”

The recipient was Jamie Stewart.

The journey hasn’t been easy; for Stewart, it made receiving the award all the more significant.

In 2010, she earned a master’s degree in organizational leadership from Regent’s School of Business and Leadership. Then she decided to pursue an Ed.D in education at Regent.

But after taking on the academic rigor of pursuing a doctorate’s, she had an even bigger hurdle to overcome.

“It was like a punch in the solar plexus,” said Stewart. That’s how she articulated what it felt like when her doctor called and diagnosed her with cancer in 2012.

Since the diagnosis, she’s continued working, and recalls working on her doctoral competency exam not from a library or coffee shop, but from a chemo chair — a testimony to her resiliency and determination.

“[I’ve had] absolute support from the dean, from my chair … encouraging me,” she said.

“The reason I’m still here is because God has got my back,” Stewart added. “[He] has put the right people here to help me fight through this.”

And as for the APO National Alumni Distinguished Service Key, Stewart acknowledges it’s a rarity — one that only one, maybe two, people receive each national convention.

“In undergrad,” she said. “I’d sit and do cross-stich in the back during chapter meetings.”

Stewart joined APO in 1987 during her undergraduate years at Virginia Tech. She now serves as a community advisor at Norfolk State University, Old Dominion University, Regent University, and as Region L and Region M Extension Coordinator. The latter position allows her to help charter and re-charter chapters in North Carolina, South Carolina, Virginia, and West Virginia.

The core principles of the organization are leadership, friendship, and service.

“[APO] aligns with principles of Christian leadership,” said Stewart. “People in APO are always trying to change the world.”