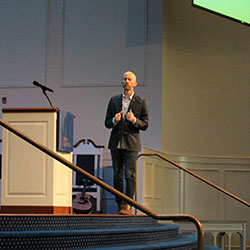 Mabry helped plant two churches while in Edinburgh, Scotland, and then planted Alethia church in 2009, after he returned to the states.

Aside from his work in church planting, he’s also written several books: Christ at the Core: A Journey in Colossians, a “guidebook” for Colossians; Sex, Love, and War, in which Mabry offers a Biblically based approach to sexuality and love; and Life and Doctrine: How the Truth and Grace of the Christian Story Change Everything, a discussion on God’s grace.

The key theme of Mabry’s message during the chapel service was on the importance of grasping a Biblical understanding honor.

He took time to dispel false notions of what honor is before expounding on how important it is to understand it.

Mabry said people wrongly assume honor is earned or that it’s a right or that it’s only given to those who people find familiarity in.

He said he didn’t grasp what a “culture of honor” looked like while growing up.

“Around our dinner table, the way you were heard was by talking louder or pounding the table or being a little bit more quick-witted and sarcastic,” he said. “When I met Jesus, I saw the way honor worked.”

Mabry also painted pictures of unhealthy situations in the Church where honor was absent or misunderstood. In some instances, Mabry said, pastors are used and “burned out” by congregations. In others, pastors demand or are given special treatment simply because of their position; they don’t serve their congregations, but rather, expect to be served.

“How fascinating is that? That you, at your worst moment, still bear the thumbprint of the one who crafted you from dust?” said Mabry. “And then you at your very best moment can never earn any glory greater than the fact that you were made in His image. That is profound stuff to derive human dignity [from].”

He said Christians honor God by recognizing the image of the Father in those around them.

According to Mabry, it’s out of this recognition — of the “thumbprint” of God in others, who all have inherent value and worth regardless of their shortcomings — that Christians emulate Christ’s disposition toward mankind.

“Jesus has fulfilled the ethics of honor for us for the most dishonorable, who deserved it the least, who were not like him, who had not earned his respect,” he said. “Therefore, we, who’ve been shown such great honor, honor the image the way the image-maker honored us.”