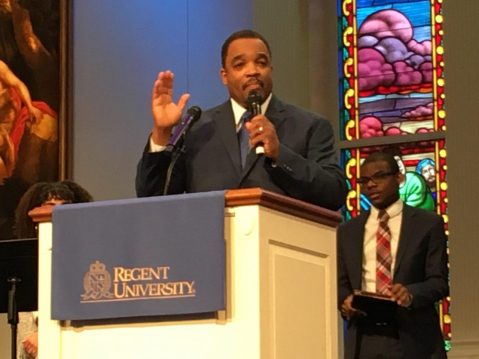 Calling Pastor Mark Lawrence’s, ’04 SCA (School of Communication & the Arts), heart for students “big” would be an understatement. And he brings not only experience in ministering to young people, but experience as an alumnus of Regent University to the table in his new role as director of Regent’s Campus Ministries.

If you meet Lawrence, it’s hard to ignore his love for people and desire to reach them with the gospel. But Lawrence hasn’t always been this passionate about ministry.

In Lawrence’s own words, he was raised a “double PK [pastor’s kid].” Both his father and grandfather were pastors in Jersey City, New Jersey, at a church his grandfather founded. But despite his intent to pursue a career as sportscaster, through a series of encounters with God, he came to accept his call as a minister.

A door opened for him and his wife Dawn to move to Virginia. After coming, he began serving as a senior staff pastor and youth pastor in Norfolk, Virginia, at Calvary Revival Church where he served for more than 17 years.

Lawrence, desiring to grow his technical skill and knowledge of media and the arts — he’s always had a love for plays and film — began attending Regent University SCA, and in 2004, graduated with a Master’s in Fine Arts.

Armed with a passion for reaching a generation of young people, Lawrence and his wife founded Kingdom First Ministries, a ministry based in Virginia Beach, Virginia, that uses performing arts — a designated “millennial magnet,” per Lawrence — to reach youth with God’s word

It was during his time at Regent that Lawrence cultivated an immense appreciation for the university’s spiritual culture, and it influenced his vision for Campus Ministries.

“In the two years I spent here … there were times I had encounters with God that literally helped shaped the course and direction of my life,” he said.

He believes Regent continues fostering a unique environment in which students can encounter God — encounters that drive them to find their calling to “carry the gospel,” something every Christian is called to do, he said.

One of Lawrence’s goals going into the semester is to expand Campus Ministries so that it engages older, non-traditional undergraduate students as well as graduate students — a wide demographic that makes up a significant part Regent’s student body. This includes both single and married students, as well as those with families.

As director of Campus Ministries, Lawrence’s main focus is to “make disciples.” This is how the gospel is spread as “you have got to be disciples to make disciples,” he said.

But that doesn’t negate his yearning to actively create and maintain relationships with students around the Regent community.

“In those places and areas when you need help when you are hurting, when you are broken, when you are lonely, when you are, fill in the blank, Campus Ministries is here to love you and support you, to help you,” he said. “Sometimes, you just need somebody to listen and we’ll be here to do that also.”