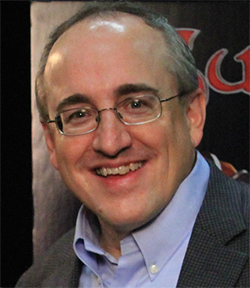 Fade-in to a classroom 10 years ago: a roomful of students faced the creative challenge to adapt a story from literature to film or theatre.

One student set out to modernize the biblical story of Ruth and Boaz. But after encountering a few challenges along the way, he decided to relinquish the story.

“But there were parts of the story that didn’t let go of me,” said Sean Gaffney, Regent University School of Communication & the Arts (SCA) professor, who was teaching that class of writers at another school.

He asked permission from the student to work on the story further. And from that creative tug-of-war came the very first scripted inklings for In-Lawfully Yours, a full-feature film produced in partnership with Regent and Home Theatre Films.

“And if [audiences] expect a traditional, Christian drama, that’s not what they’ll get,” said Gaffney.

What they’ll get instead is a comedy. With an Atheist-protagonist. And while the script was celebrated in many of Gaffney’s professional writing circles in Hollywood when it was first drafted, it broke a lot of the traditional rules of Christian film.

“To be honest with you, I didn’t think it would ever sell,” he said.

So the script succumbed to a life in a box with a few of his other projects. The story of so many unsold scripts in Hollywood.

But, much like Jesse in In-Lawfully Yours, the death of a dear friend and mentor – Jack Gilbert, veteran Hollywood writer and mentor – spurred Gaffney into a new season.

“He was an icon in Hollywood. He was one of the humblest, quietest men you’ll ever meet but he had an extraordinary impact. When he passed he left a very large hole in our community and in training the next generation [of Hollywood writers],” said Gaffney. “There were many of us who felt called to step in and cover areas that Jack would’ve covered – it’s going to take 1,000 of us to fill his shoes.”

So, Gaffney left the “sexy comfort trap” of a well-paying position at a major studio in the movie capital of the world to pursue a career in teaching in Virginia Beach, Virginia.

“I like to say that God tricked me into coming mostly, because he answered all of my selfish objections before the question was asked,” said Gaffney.

Objections like the perceptions his peers would have if he left Hollywood. The feeling of giving up. But then, one of his plays was produced. The Christian Broadcasting Network hired him for a long-term video project, and Home Theatre Films picked up his script. All within a year of making his cross-country move.

In May 2016, Gaffney watched In-Lawfully Yours at its premier in Bel Air Presbyterian, the church he called home for the entire time he lived in L.A. An experience he describes as “surreal.”

“It was kind of like I went off to college, and I was introducing my new girlfriend to my parents,” said Gaffney.

September 2016, In-Lawfully Yours will release to a worldwide audience on Netflix, and also on DVD and Digital HD.

“Most of us most of the time don’t get to see the good that God is doing when we pay attention to His will,” said Gaffney. “But once in a while we’re blessed to be able to see it.”