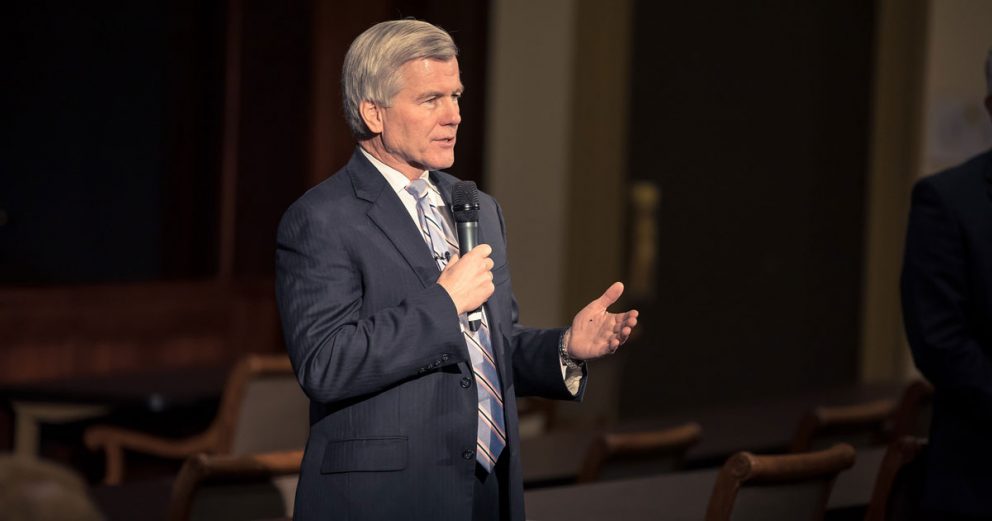 Although Senator A. Willis Robertson — father of Regent University Founder, Chancellor & CEO Dr. M.G. “Pat” Robertson — passed away over 47 years ago, on Tuesday, December 4, students, faculty and staff at Regent gathered to celebrate his legacy at an annual lecture named in his honor.

“He always cared about his constituents, what they wanted [and] what they needed,” said Robertson of his father. “He recognized he was a servant and he brought me up in that same tradition of service.”

An ardent outdoorsman, U.S. Army officer during the first World War, statesman and namesake of the Robertson School of Government, Senator Robertson maintained fiscally conservative values throughout his political career.

“To have his great legacy here at Regent, and for me to be allowed to speak today on some of these issues facing our nation is a treat,” said distinguished professor and former Virginia Governor Bob McDonnell.

For more than 240 years, America has persisted, “exporting democracy [and] capitalism … throughout the world,” said McDonnell.

And as always, a host of issues endanger its survival.

Among them, he specifically addressed “trampling on federalism.” Federalism, in short, is a recognition of the need for local, state, and federal government each functioning within their intended capacity, McDonnell explained.

As an adherence to federalism drops from American politics, the federal government continues expanding its bureaucratic reach — something Senator Robertson consistently voted against.

“Here’s the problem,” said McDonnell. “You have the federal government doing way too much, not doing it well, taking its cut and sending the crumbs back to the states.”

The “upshot” of it? A national debt of 21 trillion dollars, McDonnell added, quoting Sen. Robertson: “If the deficit continues to rise, foreign and domestic capital will flee from the U.S. dollar.”

McDonnell also warned those present not to engage in the “vitriolic and toxic” incivility that characterizes aspects of the current political rhetoric and atmosphere in the U.S.

“It is a party and it is power over people and policy,” he said. “When you have that prescription to be the coin of the realm, it is very, very hard to actually accomplish things.”

He asserted that the barrage of news and social media carry some responsibility for the digression in kindness and respect.

Quoting President George H.W. Bush’s response to those who claimed he wasn’t “tough enough” — specifically during his run for the White House — McDonnell read:

“I don’t equate toughness with just attacking some individual; I equate toughness with moral fiber, with character, with principle, with demonstrated leadership in tough jobs, where you emerge, not bullying somebody, but with the respect of the people that you lead. If I happen to be decent in the process, that should not be a liability.”