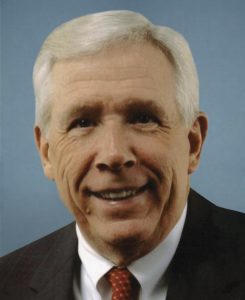 Wolf also is the author of the legislation to create a special envoy at the U.S. State Department to advocate for religious minorities in the Near East and South-Central Asia. He has dedicated his career to advocating for those who cannot speak for themselves.

Grounded in the wisdom and experience gleaned through his extensive career in Washington D.C., Wolf brought a message of hope and action, urging his audience to fight for civility in the modern political landscape.

Wolf urged listeners to be friends with those unlike themselves, explaining that party-lines were never intended to stand as barriers between Americans. “I’m a conservative Republican, but my best friend in Congress was a democrat – Congressman Tony Hall,” said the former Congressman.

Wolf echoed the eternal virtue that unity must remain central to a strong country. He went on to discuss the unprecedented adversities in America’s present political climate.

“The level of inductiveness has never been greater,” said Wolf. “We need to get ahold of this.”

Wolf also discussed the importance of fighting for religious liberties in America and around the world. “I stand here tonight with a grave and growing sense of urgency regarding the erosion of religious liberty at home and abroad,” said Wolf.

“The task, I believe is urgent, the stakes are high – I think what remains to be seen is whether the people of God will rise to the occasion for such a time as this.” Quoting the book of Isaiah, Wolf reminded listeners that if we satisfy the needs of the oppressed, then our “light will shine in the darkness and [our] night will become like day.”

Wolf’s message was humble and precise: “We need to pray. We need to speak. And then, we will need to act… I would love to see the college campuses aflame” – aflame with the zeal to bring aid to those who are persecuted because of their religious beliefs.

Student and faculty left Wolf’s lectures encouraged, sobered, and motivated to stand up for the oppressed and marginalized – the Jews facing anti-Semitism in America, the Uyghurs in China, and the Yazidis in Iraqi.