“By Faith Alone”: Dr. James Flynn Speaks on the Power of Belief and Martin Luther at University Chapel 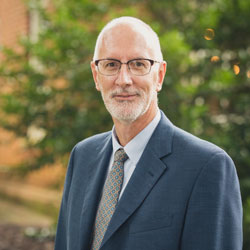 On Wednesday, October 25, associate dean for Regent University’s School of Divinity (DIV), Dr. Jim Flynn, paid tribute to the Reformation movement, which is going on its 500th anniversary, in a University Chapel message titled, “By Faith Alone,” a concept brought forth by Martin Luther, leader of the Reformation.

Flynn received his Doctorate in Ministry from Regent in 2000 and began teaching as an associate professor at the university two years later. He’s committed to the pursuit of truth and considers himself honored to cultivate scholars in DIV.

He focused on the concept that we are saved “through faith alone” — not works or deeds or our own righteousness we try to earn. Such faith, Flynn said, can have far-reaching results.

“My goal today, I feel what God wants to do, is to activate faith in our life so that we can go out as Christian leaders to change the world and act as catalysts to set off our own spiritual, moral, ethical earthquakes wherever we are,” he said.

He explained how Luther pledged himself to pursue God after a harrowing experience in which he was nearly killed by lightning. Shortly after, Luther found himself at a monastery, learning priestly disciplines and constantly confessing his sins to other priests.

Here, he grew restless, confronted with the truth that man is unable to free himself from sin on his own, a truth reinforced through his incessant admissions of his own wrongdoings. Furthermore, practices in the Catholic Church, such as the selling of indulgences — “get out of jail free cards” for purgatory in the words of Dr. Flynn — angered Luther.

The idea that sin cannot be purged through works burrowed deep and gnawed at Luther until he couldn’t contain his frustration and conviction. He consequently pinned his 95 Theses to the doors of Castle Church in Wittenburg, Germany.

Luther, by faith, began a “spiritual earthquake” of a movement, one founded on total faith in and dependency on Christ and His work on the cross.

This revelation that resonated deep within Luther — that humans are wholly inadequate in saving themselves — is one we must grasp, said Dr. Flynn. There is no good we can do without God, and like Martin Luther realized, we must cling to faith.

Flynn’s own inadequacy was illuminated one evening years ago when his child interrupted his pre-sermon studies because of an overflowing toilet. Through a series of events, Flynn found himself having to drop into his dirty septic tank.

While suspended in the chamber of filth, he heard God tell him, “It’s hard to live in an unclean vessel.”

“Can you imagine what God has to deal with living on the inside of me every day?” he said. “I can’t do it. I’m completely unworthy.”

He likened someone trying to earn their own righteousness to a person attempting to present a septic tank as a clean place to reside.

“I have to rely on the gift of God, being justified as a gift, just as if I never sinned, reconciled to be able to stand in the presence of God, purely as a gift,” said Flynn. An individual who refuses to acknowledge this “gift” as necessary for Christian living “hinders” their walk with Christ, he added.

“There’s no hope for any of us apart from faith alone in Jesus Christ,” said Flynn, reiterating Romans 3. “It’s faith in him, the object of our faith, that makes all the difference; not how wonderful your faith is, but we put it in him and it does extraordinary things.”

And this faith not only saves, but brings things to fruition that surpass the wildest dreams of many.

Flynn cited Hebrews 8:11, which says, “Now faith is the substance of things hoped for, the evidence of things not seen.”

“We are literally sitting in this chapel in the substance of things hoped for and the evidence of things not seen,” he said. “I’m sitting in the evidence of someone’s hope and the faith that they exercised, and whether it’s Martin Luther or whether it’s Dr. Robertson, I am a blessed man because … the Holy Spirit activates my faith and gives me the opportunity to set off my own spiritual earthquake right where God has put me.”

“God has called us to set off those earthquakes by sitting in his faith,” he added.

“When he puts us in the place where faith alone is the solution, you’re in a good place, and you’re in a God place,” he said. “Because that faith alone accomplishes miracles. That’s what Luther had to do, [and] that’s what we have to do today.”