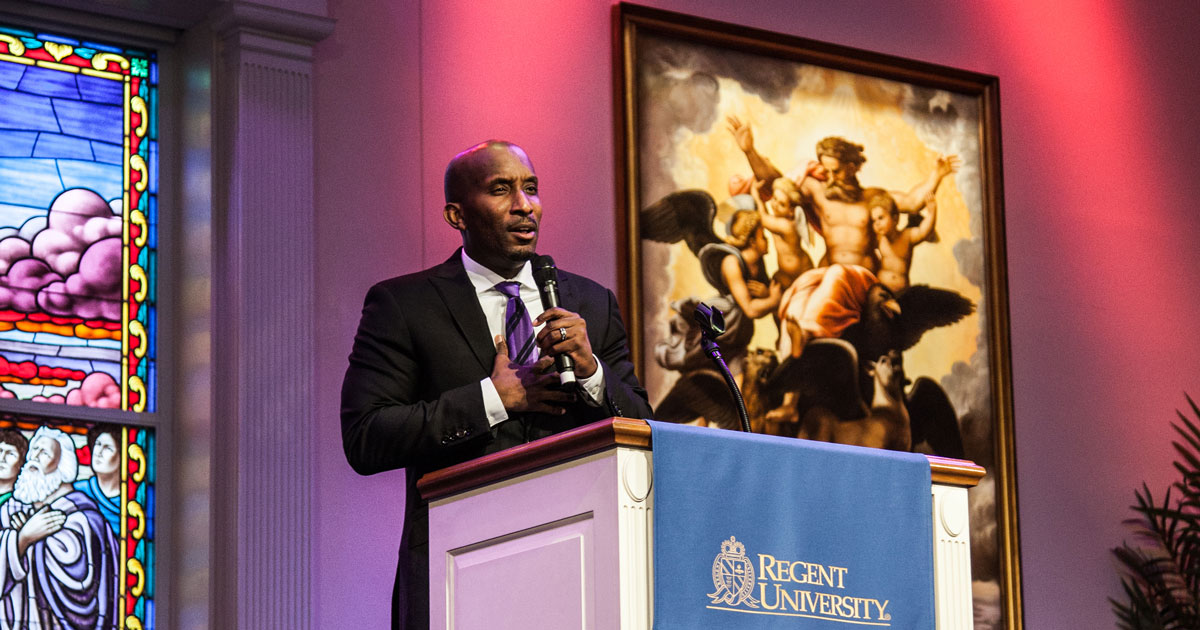 King David — a prolific figure throughout a good portion of the Old Testament who God used to lead His chosen people.

But what if David’s prosperity didn’t come from his strength or power, and instead, an acceptance of inadequacy? Dr. Dharius Morshun Daniels thinks so.

On Wednesday, February 7, Daniels gave students, faculty, and staff present at University Chapel a simple yet challenging charge — to abandon the notion of control over life and surrender it to Christ.

He said seasons in which we relinquish control are full of ambiguity. However, surrendering our will to God’s, he said, puts us under his control. It’s from this place of submission that we can live as he intended.

In Psalm 23, Daniels believes David articulates the blessings a believer submitted to Christ lives in, painting a resounding picture of such a life.

Daniels believes the passage not only illuminates a person’s inadequacy to steer safely on their own, but shows how “God wants to do more than save it, he wants to lead it, and if we allow him to lead it, no matter how long it takes us to get there, no matter what the route may be, when we settle in the space he has prearranged for our life, it will be green pastures, and it will be still waters.”

In reality, human’s perception of control is simply an “illusion.”

“I’m not advocating apathy in any sense, but I am trying to free us from the illusion that we are responsible for more than we’re actually responsible for,” Daniels added.

He likened this helplessness to a job interview: “We can dress well, we can articulate our thoughts well, we can interview well, but you can’t control whether that person on the other side of the desk hires you.”

And discontentedness, Daniels said, “blinds you to the amazing, generous, benevolent God that has uniquely blessed you with a life other people in other parts of the world only dream about.”

Daniels pointed to King David as a prime example of someone who, “knew how to embrace ambiguity, who knew it was ok to have a plan and to allow God to wreck it,” said Daniels.

It was because of the simple courage to trust God with his life — not by hustling, fighting to direct the course of his life, or any act on his own behalf — that God carried David, through a series of supernatural occurrences he ordained, from his victory over Goliath as a humble shepherd boy to becoming ruler of Israel.

“I think when it was all over, I’m sure as David reflects on his life, he’s probably glad that somebody besides him was leading it, ordering his steps,” Daniels said.

“He says, ‘the Lord is my shepherd,’” he added. “When we are willing to go from savior to shepherd, when we’re willing to see him as one who does more than clean our past, but one who secures our future, when we release control, we can give control to the one who [will] lead us in the right path.”