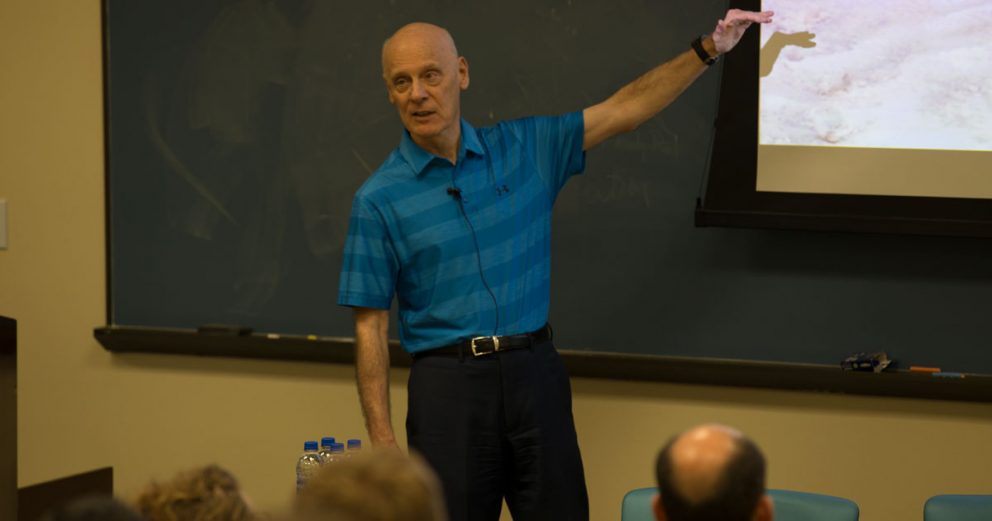 Life, decay and change. It’s all part of the world we live in — a world made just for us, down to the very molecule, as Dr. Hugh Ross pointed out in a talk with students on Wednesday, April 4.

A close look at creation, at the intricacies of nature and how elements interact and balance one another reveals God’s intentionality.

“The bottom line is [life] looks the way it is because there’s a creator that wanted human beings here on planet earth,” said Ross. “That mandates a very highly specified history of life.”

He then discussed natural occurrences, such as solar flares, gradual changes in tidal heights, and shifts in the earth’s rotation speed as manifestations of our world’s and solar system’s entropy.

Ross posed a question those skeptical of God sometimes ask: Why would a loving creator choose a torturous process of life and death and change?

In short, God designed the earth to handle the changes humans and other created beings, like animals, create in the environment.

Eroding silicates balance greenhouse gases, which subsequently regulate the sun’s brightness, and other chemical levels in the earth’s soil help suppress poisonous, soluble metals to the point their levels are low enough for human’s to go unaffected.

The world, said Ross, may not be able to support life much longer.

“There’s something optimistic about this,” said Ross. “By the creator placing us human beings at the very end of the line in the history of life on planet earth, we get to reap the benefits from 3.8 billion years of the buildup of bio deposits in the crust of the earth, and it’s a huge treasure chest of bio deposits that enables us to build freeways and cities and sustain our high technology civilization.”