How Christ’s Coming Proves Vital to Education and Forming the Next Generation: An Interview with Regent University School of Education Dean Don Finn 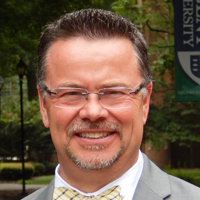 It’s winter in New England. The year is 1636 — central heating won’t roll around until the 1880s. Neither will electricity. For the pioneers of this “new world,” farming has proven difficult, and their settlement is besieged by an icy winter.

And now, they’re headed out into the chill to help build their small community’s first structure. It’s probably a fort or barn, right? Wrong.

It’s a gathering place that functions, in part, as a school.

Not all the facts from this fictional scenario are dead on. Perhaps there were settlers that built a fort or barn first. However, in colonial America, many communities built a church/school/meeting house first.

But why? What caused them to literally structure their settlements around teaching? It’s because early settlers placed an immense value on education. For them, education’s primary purpose was to make individuals literate so they could read the Bible. They knew the lessons shared in that meeting house heavily influenced the next generation and hence used teaching to promote Biblical values.

So how does Christ’s coming affect all this? What would education look like without his example? And how does an educational system benefit from a carpenter from Nazareth?

“Education has an impact on culture in that it is a means or a vehicle used to communicate the cultural values, to promote ideas of community, citizenship, and those types of ideas that are really key to living in a peaceful and productive society,” said Regent University School of Education Dean Don Finn. “It’s foundational for transmitting those values.”

Education is a conveyor belt of sorts. Through it, we send the next generation the things we best believe will build them as whole, well-rounded, virtuous people. It’s centered on people, and for Christians, on raising them to hold to what is good and right and true in a way that models Christ.

In a world without Christ, the conveyor belt system would probably remain the same, but the messages and values being transmitted through it wouldn’t.

“The foundations of Biblical and spiritual principles and morals and ethics, those types of things, would be left up to another system [of morality]. And who knows what that might be?” Finn said. “There would have been some system of morality; some value system would have been at the core of those teachings.”

Christ came to earth, and ultimately loved those — the diseased, impure, greedy, and what culture deemed as worthless — that a society without him would do away with.

Unlike many secular systems of morality, Christianity mandates people are inherently valuable because they are crafted in the image of God, and although Christian educators often face ideological opposition and a plethora of other challenges, even here in the United States, they retain a place of influence in the classroom and can still continue molding the next generation in a way that reflects Christ.

It’s this principle — to see people as Jesus did and treat them so — that makes Christian engagement on this conveyor belt of culture so significant.

“Too often we forget that Jesus in fact has come, that we’re his children, that we’re called by his name and that His spirit dwells within us,” said Finn. “[Teachers] can provide a level of hope where there are situations that seem hopeless; we can provide love where there’s a lack of love … to kids, to coworkers, to parents.”

“[Teachers] recognize … that God has a plan specifically for them, for the most difficult student, the most compliant student, and everybody in between,” he added. “As Christians, that shapes how Christians conduct themselves and how they look. It’s more of a kingdom and an eternal perspective … that perspective that these are souls.”

The year is 1637, and the winter was harsh to say the least. But it’s springtime, and life has returned. As settlers head off into the fields to work, they can hear a bell ringing, signaling the village children that, for the first time, school is in session.