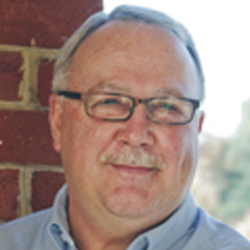 Known for his contagious love of Christ, his enthusiasm for his students, and his love of the Toy Story character, Buzz Lightyear, Swaffield leaves a legacy of encouragement and passion.

His daily devotional website, “Devotions for Life: New Ideas from Old Ways,” was favored among Regent’s community. He diligently wrote devotions on his site every day for more than 10 years.

“Bruce was one of the kindest, gentlest Christian brothers I’ve ever known. He was quick to respond positively to students’ needs and mentored them — no, I must say, he truly discipled them,” said Dr. Mitch Land, SCA dean. “I know he has a front-row seat in heaven.”

Dr. Swaffield began teaching at Regent in August 2003 after an extensive career in newspaper and magazine-writing, and teaching at universities such as Roanoke College and Malone College.

“Dr. Swaffield was one of the first people to tell me that I was a good writer,” said Rachel Bender ’10 (SCA). “Not only did he tell me that over and over again, but his painstaking attention to my work in class, as well as his support as my thesis chair, was a large reason I made it through my program. Every time I went to his office or stopped to talk with him after class, his peaceful demeanor and unwavering belief in my abilities helped me believe I could do what I’d set out to accomplish.”

“He was very open and lived out his faith with great humility and transparency,” said Land. “Even after retiring he continued to serve as a faithful adjunct professor whose students wrote often of his excellent teaching and mentoring. We will miss him greatly.”

His final devotion, dated Monday, August 15, is titled “Planning for Tomorrow,” and touches on the theme of having an eternity with Christ.

“We are seated forever with Christ,” he wrote. “We have a place in eternity. All this is a gift from God. There is no way to earn it.”

Swaffield is survived by his wife and high school sweetheart, Jeannine, his two children, BethAnn and Brendon, and several grandchildren.