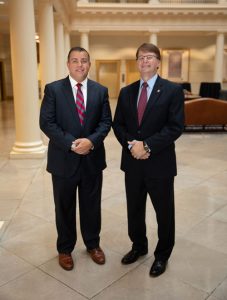 VIRGINIA BEACH, VA (October 1, 2019) – Bradley J. Lingo, J.D., was named today as associate professor at the Regent University School of Law. The announcement was made by Mark Martin, dean of the School of Law and former Chief Justice of the Supreme Court of North Carolina.

“Professor Lingo is a nationally prominent attorney who comes to Regent from the partnership of one of the nation’s most prominent law firms, King & Spalding. Our students will benefit from his experience litigating high-stakes matters and work in the areas of civil rights and religious freedom. We are so excited to welcome him to the Regent community and look forward to his vision and leadership,” said Chief Justice Martin.

“It’s an honor to join Chief Justice Martin and the other prominent recent additions to the Regent Law faculty. I look forward to working with my new colleagues to mentor and train the next generation of legal advocates,” said Lingo. He continued, “My new role will allow me to focus on those things that I find most meaningful. I’ve had a great run at King & Spalding, but it’s now time for a more significant climb. Regent Law has experienced tremendous growth in the six months since Chief Justice Martin’s arrival. I can’t imagine a more exciting time to join its community of scholars.”

Prior to joining the Regent University School of Law faculty in 2019, Lingo was a partner in King & Spalding’s Trial and Global Disputes practice group. His work encompassed a broad array of trial and appellate matters, with much of it focused on defending accounting firms against claims of malpractice and securities fraud. He represented three of the Big Four accounting firms in matters where plaintiffs sought damages of more than $1 billion dollars. Among other accomplishments, he was one of the lead trial lawyers in what is believed to be the highest-stakes case in U.S. history to be tried by an accounting firm to a complete defense verdict.

Lingo also litigated a number of pro bono and religious-liberty cases while in private practice. Accounts of this work have appeared on the front pages of The New York Times, The Washington Post, and The Wall Street Journal. He served as president of the Federalist Society’s Charlotte Chapter from 2013 to 2019, and he served by appointment of the U.S. Commission on Civil Rights on the Commission’s North Carolina State Advisory Committee from 2016-2019. Super Lawyers named him as one of North Carolina’s “Rising Stars” for three consecutive years.

Before his career with King & Spalding, Lingo practiced in the Washington, D.C. office of Gibson, Dunn & Crutcher. He also served as a law clerk to the Honorable Morris Sheppard Arnold of the U.S. Court of Appeals for the Eighth Circuit.

Regent Law’s more than 3,300 graduates practice law in 49 states and over 20 countries and include 38 currently sitting judges. The School of Law currently ranks in the top 25 percent of all law schools for obtaining judicial clerkships and achieved the highest overall passage rate on the Virginia bar exam (July ’17 and February ’18). The school offers the Juris Doctor (J.D.) in three-year and part-time formats, an online M.A. in Law, an online M.A. in Financial Planning & Law, an on-campus LL.M. in Human Rights and an on-campus and online LL.M. in American Legal Studies. Meet Regent Law Faculty.

Founded in 1978, Regent University has nearly 11,000 students studying on its 70-acre campus in Virginia Beach, Va., and online around the world. The university offers associate, bachelor’s, master’s and doctoral degrees from a Christian perspective in 135+ program areas including business, communication, the arts, divinity, education, government, law, leadership, and psychology. Regent is listed among top National Universities by U.S. News & World Report, 2019 and is one of only 23 universities nationally to receive an “A” rating for its comprehensive liberal arts core curriculum (American Council of Trustees and Alumni).