“Be the Best that You can Be!” Janet Ashcroft, Wife of Former U.S. Attorney General John Ashcroft, Speaks to Regent Law Women 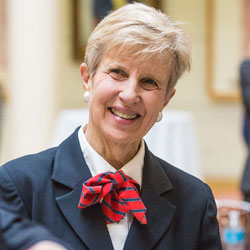 “I am grateful for all the roles I have had in my life thus far,” Ashcroft told a group of female Regent University School of Law students at a Regent luncheon she hosted.

Mrs. Ashcroft is a wife, mother, lawyer, published author, professor, water-skier and snow-skier, among other talents.

At the lunch she shared how she balanced her professional career with her personal responsibilities, all the while supporting her husband and his political career.

“We didn’t do a lot of planning, but the Lord really guided us through our victories as well as our losses,” said Ashcroft.

Mrs. Ashcroft explained that her husband’s “life is a picture of him intending to do one thing and God pulling him in a different direction.”

She also encouraged the women of Regent Law to keep their faith at the forefront throughout their careers.

“Everyone encounters bumps in the road. You can’t control the bumps,” said Ashcroft. “We just have to grab the bull by the horns, try to address it and do our best – it’s amazing how successful we can be.”

“That doesn’t mean don’t ever prepare or don’t get ready,” said Ashcroft. “By going to law school you’re getting prepared.”

Her final advice to students was simple: “Be the best that you can be!”

José L. González It is fitting during the National Hispanic Heritage Month to call attention to the many years of faithful service and help by our dear friend and colleague, Pastor and Professor José L. González. He has been a professor in …

Read More
Access the Next Level of Your Nursing Career

Whether you’ve already obtained your bachelor’s degree in nursing or starting on your nursing education path, working toward your Master of Science in Nursing (MSN) degree can help open doors to a meaningful career and exciting leadership …

VIRGINIA BEACH, VA (October 12, 2021) – Regent University’s School of Communication & the Arts is pleased to announce the home release of Christmas in July . The well-received family drama was coproduced by Regent …