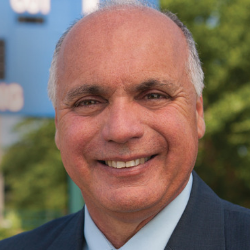 Regent University is proud to announce that our current athletic director, Dr. Samuel Botta, will expand his role to coach the university’s men’s basketball team.

“I am honored to join an outstanding group of Regent Royal’s head coaches as we lead our teams and athletic program into the future,” said Botta. “I truly believe that being a coach, and specifically coaching basketball, has been woven into my DNA by God.”

The new role harkens to Botta’s past athletic and career experience. In both high school and college, he played basketball. Afterwards, he coached high school basketball.

In 1997, he was rated the #1 high school basketball coach in New Jersey by the Newark Star-Ledger Reporter. A year later, Botta was selected as one of the top coaches for the past 20 years in New Jersey and received the New Jersey State Interscholastic Athletic Association Basketball Award of Honor. In 2010, he was inducted into the Egg Harbor Township (NJ) Hall of Fame.

“Having the opportunity to coach the Regent Royal’s men’s basketball team is part of pursuing my God-given calling and passion and the fulfillment of a dream come true,” said Botta.

“‘Christian Leaders to Change the World’ will be accelerated with the focus of our own athletic director, Dr. Sam Botta, as Regent Royal’s new men’s basketball coach,” said Dr. Joseph Umidi, executive vice president for Student Life. “With his passion for character-based student athletes, we believe these young men will make a difference now both on and off the court and make a difference when they graduate in the teams they will build and serve in their vocations.”

Regent’s men’s basketball team is entering its second year, and Botta aspires to instill more than just skill in his players.

His goal for the students on the team is for them to be men of character, not characters; be exemplary in the classroom, on the court, and wherever they are; be teachable, coachable, and equipped through their education and experiences at Regent to go out and become Christian leaders to change the world; and to win on the scoreboard and in life.

Botta also plans on dubbing the theme for all Regent athletics coming season, the title of his dissertation: Winning with Character.

“We call all of our Regent ‘Loyal Royals’ to step up and support him, and all of our teams, with enthusiastic encouragement and support for the coming season!” said Umidi.

Before becoming a doctoral fellow and receiving his Ed.D. at Regent University in 2006, Botta completed his M.Ed. at Regent in 2000 and was the first-ever recipient of the George W. Selig Fellowship award. He also served as the executive director and faculty member for Regent University’s teacher licensure program in 2003-2004.

“I believe the future is bright with the great group of young men that are blazing the trail for the Regent Royal’s men’s basketball program,” Botta said. “With Regent University being a center of Christian thought and action, I have a vision that Regent University will become a Christian center of thought and action in the sports world; a sports world that so desperately needs a transfusion of building character in men and women, boys and girls, through and in the arena of athletics.

Welcome to the fourth video of the Robertson School of Government (RSG) Election Integrity conference. Below, you can access important insights from Dr. Peter Navarro, author of the definitive review of the 2020 …