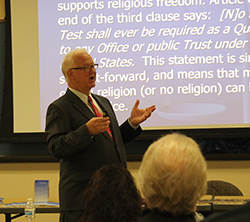 September 17 marks the nationwide observance of Constitution Day – a day that celebrates the signing of the all-American document at the Constitutional Convention in Philadelphia in 1787.

“The Constitution is an incredible document. In under 5,000 words it established three branches of government, separation of powers, and an ingenious system of checks and balances that has survived over 200 years,” said Dysart. “While it certainly had it flaws, our country has been able to rectify many of those through amendment. On Constitution Day we can celebrate the document, and we can criticize its shortcomings. We are blessed to live in a country with a Constitution that permits in both word and application a robust debate about our governing document.”

Dysart explained that Constitutional Law is a difficult course, and that it can be difficult for students to fully understand how the Constitution was and should be interpreted.

“And it’s a privilege to help my students work through these complicated issues,” said Dysart.