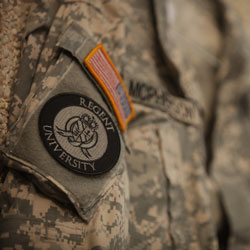 Veterans know the sacrifice that accomplishing a mission often requires. For Christians in the armed forces, the mission of sharing their faith with others is no exception. But despite the challenges, it’s far from impossible.

On Friday, November 11, Regent University’s Military Resource Center hosted the Veterans Prayer Breakfast. Amidst the hymns and scriptures that were shared and reflected on throughout the event lay a common theme of gratitude for veterans’ service.

“May we love [veterans], care for them, pray for them, and support them and give them all that they need to fight the good fight,” prayed former Navy Chaplain and Regent University School of Divinity professor, Dr. Mark Jumper. “And when they answer our call to serve and give and fight, may we never forget these who gave their all for us.”

During the breakfast Colonel Steve Myer (USA, Ret.), gave an address. His message was peppered with truths that applied to military as well as civilian Christians. He encouraged individuals to integrate their faith unashamedly into all they do.

“In today’s culture, and particularly the military, [there’s] an assault on the whole idea of living your faith life openly [and that],” Myer said.

In contrast, Myer said, “He [God] wants us to not hide our light from the world under a bushel basket, but to let it shine, and you can’t let your faith shine the world is trying to keep it in a box.”

“This is a real challenge for us,” he added.

Myer, who served in the United States Army for 28 years, currently works with Military Ministry of Cru. He and his wife, Carleene, have been volunteering for the organization for over 15 years. They are both dedicated to strengthening married military couples’ relationships via ministry.

According to Myer, there are four key components Christians must have if they are to fully integrate their faith into what they do. They must grasp and remain focused on God’s will, help carry out the mission of spreading the gospel, maintain determination to carry out this mission, and to act like Christ in relationships.

He used Jesus’ actions throughout scripture to demonstrate the principles, citing instances in his life and ministry in which he remained dedicated to fulfilling God’s will and his mission of bringing salvation to the world.

Sharing Christ’s message — the gospel — is something that becomes integrated into every area of our lives as a result of commitment to God’s mission, he said. In short, showing faith becomes inescapable when we are truly in line with God’s mission — it becomes grafted into our identity.

The unique ways believers show faith reflects the diversity of individuals within the body of Christ.

“We all have the same general mission, but we have one that’s specific to us, to our gifting, to our place in life and where we live,” he said. “There’s things that only we can do.”

“From that relationship we have with Jesus and the Trinity, that enables us to connect wherever God has called us,” said Myer. “But if we’re to do that, we have to be testimony — an unambiguous testimony.”