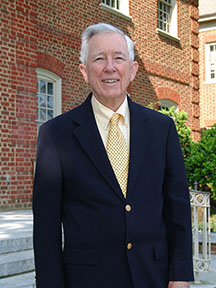 Phillips served as a Regent board member on several occasions beginning in 1991 to the present. He served as the university’s Chairman of the Board from 2009-2011.

“I am saddened by the passing of my dear friend, Conoly Phillips,” said Dr. M.G. “Pat” Robertson, founder, chancellor and CEO of Regent University. “He has been a dear friend of mine for decades. I prayed with Conoly before his passing and asked that God would send the angels to carry His beloved son to his heavenly resting place. I can say with great confidence that this wonderful man is now fully alive and rejoicing in the presence of the Lord Jesus Christ.”

In his personal writings, Phillips noted that, starting as a pre-teen, he knelt by his bed every night to pray, yet lacked a full understanding of salvation. While teaching his church youth group, Phillips was introduced to an assistant pastor at another local church. Intrigued by the pastor’s vision to start a Christian television station, Phillips kept up with him, eventually advertising on his station. That man was Pat Robertson.

Robertson personally led Phillips to the Lord over lunch at a Norfolk, Virginia, restaurant. His struggling automobile business later became one of the most successful dealerships on the East Coast.

In his writings, Phillips noted, “I could identify with Pat Robertson because he had a young, struggling business and so did I, but he had something that I lacked. He was very positive about his future whereas I had the weight of the world on my shoulders. … My idea of salvation was corporate – God so loved the world – and I was part of the world, so He loved me. The fact that He loved me as an individual was a new idea. I repeated the sinner’s prayer and accepted the Lord right there at a restaurant on Military Highway.”

A Journey of Service

Phillips served two years in the Air Force with a rank of First Lieutenant. Using a grant from the Veterans Administration, matched by Cavalier Motor Company, he began on-the-job training in parts, service, and office work in the mid-1950s. He quickly advanced to selling new and used cars and learned business operations of running a dealership. By the summer of 1956, Phillips began the process of starting his own dealership. His new company sold its first car on March 2, 1957, the day of Phillips’ marriage to the former Betsy Ferebee.

Phillips traveled to Bogota, Colombia, for the opening of the Christian Broadcasting Network’s first international radio station in 1968. It was a trip that fully ignited his passion for Christ and marked the beginning of his legacy of bold obedience to God.

Soon after, Phillips helped develop a drug intervention program for local youth with Rock Church founders and pastors John and Anne Gimenez. He organized a prayer breakfast in Norfolk, inspired by the National Prayer Breakfast he attended in Washington, D.C. in the early 1970s. He ran for Norfolk City Council and earned the support of the Christian community, serving from 1976 to 1980, and from 1986 to 2002.

Every venture for Phillips was an extension of his ministry. He was a pioneer in marketing, in the sale of automobiles, in Christian political involvement, and to the faith community. “He and Betsy have been shining examples of full devotion to Christ,” said Robertson.

Committed to God, Country and Community

Phillips was instrumental in paving the way for downtown revitalization in Norfolk. He began the tradition of opening City Council meetings with prayer, saying, “Never be anywhere of importance without a call from the Lord.” He made an unsuccessful bid for a U.S. Senate seat in 1978, considering his campaign “a ministry of the Lord in calling Christians to active political participation.”

After 40 years in the automotive industry, Philips retired as the owner of a Lincoln Mercury franchise. In his later years, in addition to serving on Regent’s board, Phillips served on the board of directors for Operation Blessing, as well as serving numerous philanthropic and civic organizations.

Phillips attended First Presbyterian Church of Norfolk where he served as an elder. He was the past president of Union Mission and Hope Haven Children’s Home and actively served on the board of the General Douglas MacArthur Foundation and the Fort Norfolk Retirement Center until the time of his passing.

A 1949 honor graduate of Maury High School in Norfolk, Virginia, Phillips earned his bachelor’s degree, with honors, in 1953, and his MBA from Old Dominion University in 1977. He and Betsy have three children: Elizabeth Foster, James Phillips and Charlotte Herndon.

“We are all grateful for the tremendous investment that Mr. Phillips made to Regent for so long and in the lives of many of us,” said Gerson Moreno-Riano, executive vice president for Academic Affairs at Regent. “We will deeply miss Phillips’ bold and obedient spirit, as well as his encouragement. Our prayers are with his wife and family.”