Dr. Daniel Gilbert Speaks on the Foundation of “Sola Scriptura” at University Chapel 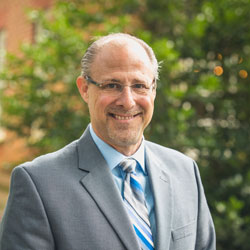 Gilbert posed a question to listeners: As Christians, are we truly living as a people who completely believe in God’s word? He maintained that if we don’t completely believe in God’s word and adhere to the other four of the five “solas” — sola fide, “faith alone,” sola gratia “grace alone,” solus christus, “Christ alone,” and soli deo gloria, “to the glory of God alone” — we are doing ourselves and others a disservice.

These “big 5,” and particularly sola scriptura, are foundational for the body of Christ, he said.

He used Martin Luther’s testimony at the Council of Worms as an example of someone devoted to scripture.

Luther was being questioned about his written works, some of which acknowledged scripture, not the pope or the Catholic church’s practices, as final authority in the lives of believers.

When asked to recant, he said the following: “I cannot and will not recant anything, for to go against conscience is neither right nor safe. Here I stand, I can do no other, so help me God. Amen.”

Gilbert said that people make way for harmful, sinful lifestyles and live by their own alternative morality under which they choose what they believe is right and wrong when they don’t hold the word of God as authority over their life.

In short, if society disregards scripture, it crumbles. If an individual doesn’t hold scripture as the chief authority, their life crumbles.

According to Gilbert, secular culture isn’t solely to blame for our culture’s moral recession.

As the Church disregards preaching scripture and submitting to it as authority, it loses its role as an influencer of culture, Gilbert said.

Furthermore, if Christians continue straying from it, they “begin to look at other ways to find God.”

“We begin to undermine the person and work of Jesus Christ and his atoning work on the cross and his resurrection,” he said.

Believers can only hope to “be changed” and “change the world” if they revere scripture as authority in their lives.

“You see, when we truly believe God’s word [scripture] is the word of God, then we begin to live it, and the word begins to change us,” he said. “Whether we believe the Bible is truly the holy, inspired, infallible word of God or not, it still is, and when we get into it on a daily basis, it changes our lives.”