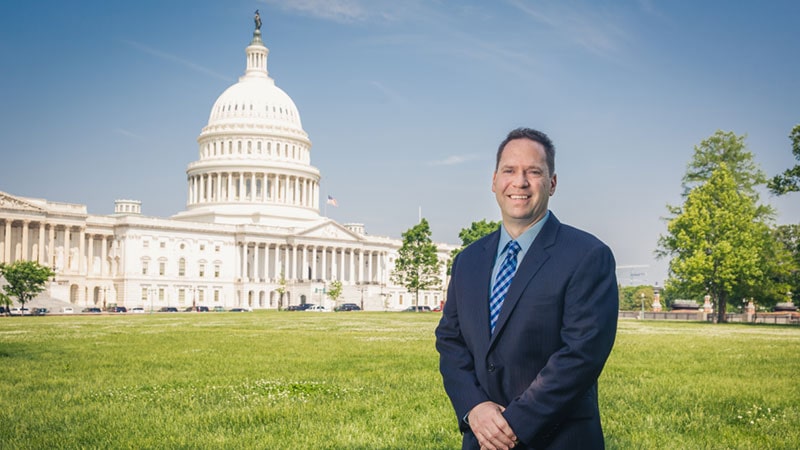 Over more than two decades working on Capitol Hill, Chris Connelly (RSG, ’98; SCA, ’20) has always made it a point to take the stairs to the Capitol. He could easily use the underground tunnels that connect the buildings … spending the bulk of his days moving internally between offices and passageways. But from the stairs, you see a bigger world and stay connected with a greater purpose, he says.

“It doesn’t matter how long you’ve been here; it always leaves an impression on you,” Connelly says. “I walk up those stairs to remind myself that I’m blessed and that it’s an honor to be here.” And so, you can bet … Chris Connelly plans to continue to enter the Capitol from the outside.

For Connelly, the fascination with politics and public policy began at a young age. In fact, he was nicknamed “Alex Keaton” in middle school, based on the young Republican character played by Michael J. Fox in Family Ties. What attracted him? Quite simply, realizing who was in the driver’s seat.

It dawned on him early that there were people in Washington, D.C. who determined “how the rest of us live. … And if I wanted to play a role in steering the direction of this country,” says Connelly, “then I had to get involved.”

Get involved he did. His lengthy career on the Hill has included serving in the roles of director of communications for the USDA during the George W. Bush administration; senior director of communications and research for the U.S. Chamber of Commerce, Global Intellectual Property Center; and chief of staff for Rep. Jo Ann Davis, Congressman Scott Rigell, and now, for Congresswoman Vicky Hartzler.

He counts working with these members of Congress as well as President Bush among the most memorable parts of working on Capitol Hill. He’ll also never forget the day that he met Neil Armstrong when Armstrong testified before Congress. “I was in absolute awe of that,” says Connelly. “It’s the Americans that have actually done things to move our nation forward, like Neil Armstrong who stepped on the moon, that amaze me.”

Yes, there have been difficult historical moments, such as two impeachments, the horrific terrorist attacks of 2001, and the anthrax and sniper attacks, but Connelly chooses to focus on positive memories and on what he has learned from other people.

“I made a commitment to go through the Ph.D. program and to finish it.”

“I tell my children all the time that we are a product of our decision. As you get a little older, that becomes a product of decisions that we made years ago,” says Connelly. In his case, one of those decisions involved leaving a marketing job he got soon after college and deciding to go to graduate school instead. “It was a good job,” he shares. And living with friends in Philadelphia was a perk he enjoyed, but he realized he wasn’t following his passion. Connelly’s epiphany came when he found himself feeling happy about work being cancelled due to a power outage. A few days later, he applied to Regent’s Robertson School of Government for a master’s in public policy.

There was no straying from the path to Washington D.C. after that. He interviewed for a position on the Hill, was selected, and “found a home” there. Connelly’s passion for government and public policy also became the cornerstone of his Ph.D. in Communication program at Regent. His dissertation involved a qualitative study on the role of constituent communication in congressional decision-making. He conducted in-depth interviews with several members of Congress and chiefs of staff for it and is now ready to defend his dissertation. Connelly wants to use his experience, knowledge and research skills to teach when he is not on Capitol Hill.

How did he balance his work, a Ph.D. program and family life? “I made a commitment to go through the Ph.D. program and to finish it. My wife and my kids have been incredibly supportive,” says Connelly. It has taken sacrifice as well (no kayaking and no television, to name the least). But these are all for a season, recognizes Connelly.

Soon, he will be the proud recipient of a doctoral degree. “Regent was very good in providing opportunity,” says Connelly. It provided a solid academic foundation as well as facilitated contacts with individuals in the field. “It served as the primary vehicle of getting me here,” he says. And with his freshly minted degree, he is empowered to keep moving forward with his eyes on a big new world awaiting him.

In my darkest moment, I was homeless, suicidal, and hopelessly addicted to crack cocaine...My best moment came in the form of a person. His name is Jesus