A Tale of Two Sweaters: Pastor Rusty George Speaks on the Danger of Envy at University Chapel 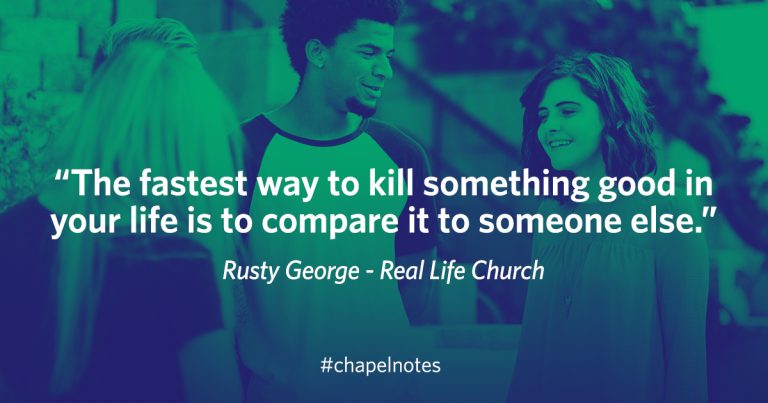 Some call it the “green-eyed monster,” others, simply call it “being green.” Rusty George calls it envy.

George, lead pastor at the multi-site Real Life Church in southern California, explained during University Chapel on Wednesday, April 26, that the vice “short circuits” a Christian’s prayer life and relationship with God.

“This little thing that gets into our life, we carry it around,” said George. “We notice it in other people, but we don’t always notice it in ourselves.”

George recalled an instance from his childhood in which he first discovered envy in his life.

In sixth grade, his parents gifted him a green Izod sweater, an eye-catching piece of 1980s fashion. George proudly sported it his first day back to school post-Christmas, anticipating attention and praises. However, upon entry to the school, he spotted a classmate wearing a Polo brand sweater — a garment that “outranked” his own — enter the same hallway, stealing the affection and attention George had so craved.

Envy, George says, does two things to a person.

First, it makes them feel superior to others. Second, it paradoxically makes them feel inferior, trapping them in a cycle of constant comparison in which they either see themselves as better or worse than others, like George when he walked into school wearing the Izod.

For Christians, envy directly impacts our relationship with God. Rather than focusing our gaze and our prayers on Christ and His will for our lives, it causes us to turn our attention ourselves and one another.

“Those of us who consider ourselves Christians do this all the time,” George said. “We compare the size of our churches, we compare spiritual giftedness, we compare our effectiveness, we compare what God has done through us, is doing to us, and doing for us.”

George eventually outgrew the sweater, but not the envy. It took him years of battling with comparison with his predecessor and founder of the church he now pastors, that eventually led him to let go of the jealousy he held.

The change came while he attended a retreat with other ministers. He said he felt God tell him, “I’m trying to do something with you, and I can’t do that through you if you’re trying to be somebody else. If they succeed, or if they appear to fail, you must follow me.”