This will be my final “dean’s corner” as Dean of the Robertson School of Government. It has been a pleasure and honor to serve in this capacity.

Last month I requested that the University allow me to step down as dean and take on the scholarly and teaching responsibilities of a full professor. Today I am pleased that Regent granted that request and brought our colleague, Dr. Stephen Perry, on as interim dean during a period of transition and search. I made this request after six years of service in order to focus more attention on family.

The past six years have seen the Robertson School triple in size, develop new programs, and respond to a dramatically changing academic environment. I am deeply grateful to the faculty, staff, alumni, and students of RSG—both past and present—as well as my friends and colleagues across Regent University, for their ongoing friendship and support. I believe in RSG’s mission to “train leaders” in the “Judeo-Christian principles” that are the foundation of our country, specifically “individual liberty, representative democracy, and constitutional government.” We are the namesake of a great patriot, Senator A. Willis Robertson, and have experienced the support of our Chancellor and Regent leaders. Dr. Perry will be a great interim dean as we have worked with him in the past on shared projects, notably in the area of political communication, and he is no stranger to scholarship, campaigns, and public service. There is much to be proud of and I look forward to supporting the expanding influence of the Robertson School of Government. 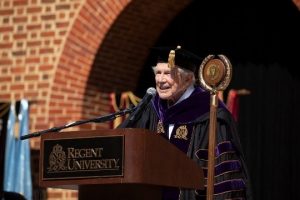 A celebratory swarm of 70-pounds of green, blue and silver confetti filled the Library Plaza on Saturday, May 12, marking the grand finale of Regent University’s 2018 Commencement.

The ceremony conferred nearly 2,000 undergraduate and graduate degrees – the largest in the university’s history – on its campus in Virginia Beach, Virginia.

But even apart from the university’s record-breaking growth, and its anticipation of its College of Healthcare Sciences and School of Nursing launch in Fall 2018, it was a landmark ceremony. This year marked the first-ever graduating class from the College of Arts & Sciences Cybersecurity and Nursing students.

Regent now has 129 programs, with an alumni populous reaching more than 25,000, represented by 50 states and spanning across 89 countries.

“You certainly deserve to celebrate… but most importantly, let’s give praise to our Lord for the good that He’s done in your lives,” said Phil Walker, Chairman of Regent’s Board of Trustees. “I applaud your class. I salute your accomplishments and I challenge you to become leaders of your community and nation.”

Nationally renowned cardiologist, author and speaker, Dr. Chauncey W. Crandall IV, delivered the ceremony’s commencement address, recalling his first glimpse at the beginning of Regent’s history when he passed through the area en route to his honeymoon with his wife – forty years ago.

“As I step on to this campus even today here and now I feel God’s presence, the rumbling of God’s power, here today. I know you feel this too,” said Crandall. “I never want you to forget this as you walk forward down God’s path.” 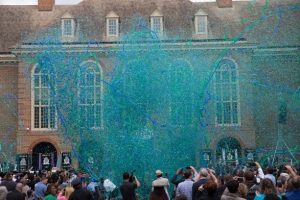 Crandall, who now serves at the Vice Chairman of Regent’s Board of Trustees, encouraged graduates to recall their first experience at Regent.

Through his own story of tragedy after facing the death of his 15-year-old son, he made the decision to “turn to” God rather than to “turn away” from Him. He challenged the graduates, in the midst of their own battles, to turn to God in the face of hardship.

“You are entitled to victory in life through Christ,” said Crandall. “Never give up – and ‘never give up on God’ should be your battle cry.”

Robertson charged the 2018 class of graduates to go into the future, secure in their identity in Christ and the promise God makes to His followers in His Word.

“The God we serve is the future, and He holds the future in His hands,” said Robertson. “When you graduate from this place, the Lord’s charge to you is ‘fear not.’ Do not be afraid. God has a plan to prosper you and do you good.”

School of Education (SOE) alumnus Dr. Terri M. Smith ’18 delivered the student response to the charge from the Chancellor, said that as a new doctorate, he can now confirm that Regent’s graduation is not the “finale of any story,” but an opportunity to “set out on new adventures” and carry the school’s values of excellence, innovation and integrity into all that they do.

“We are members of a community that has everlasting hope in our potential, and while each of us individually completed assignments and missed many an engagement to focus on scholarship, none of us stands here alone,” said Smith. “Regent prepared us to be academically successful and socially relevant, but it is God who trusts us to choose the excellence we define, the innovation we expect, and the integrity of a wholesome life! In this, we are unified in hope for a prosperous future.”

“He has a fantastic ‘can-do’ attitude about anything he’s asked to teach,” said Moreno-Riaño. “His passion is his students and he see them as people whom God is preparing for great things.” 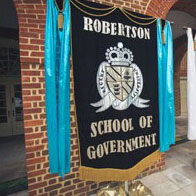 Another distinction made at University Commencement is the Alumnus of the Year Award. This year, Robertson distinguished Reverend, Dr. Colleen Derr ’13 (SOE), President of Wesley Seminary at Indiana Wesleyan University.

“It is truly an incredible honor,” said Derr, who explained that four Regent alum serve alongside her at Wesley Seminary. “Regent has had a profound impact on my life. It has formed us as it has formed you.”

Derr urged graduates to “take a moment” to reflect on what the Lord has done through their lives, and to “take a picture” so they could look back and remember their time at Regent.

“Embrace who you have become,” said Derr. “And be willing to take the leap into what else God has in store for you.”

Following the special remarks, graduates were commissioned from Regent’s School of Business & Leadership, School of Communication & the Arts, School of Divinity, School of Education, Robertson School of Government, School of Law, School of Psychology & Counseling, and College of Arts & Sciences. 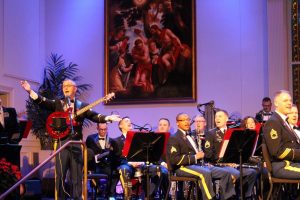 Standing in the front of the beautiful Regent University Chapel, Major Randy Bartel, Commander and Conductor of the U.S. Army Training and Doctrine Command Band (TRADOC), led his band in a great night of patriotism and music appreciation. The TRADOC Band from Fort Eustis traveled to celebrate Armed Forces Day with a free, open to the public, concert. Filling the Chapel with close to 400 patrons, the band shared not only a talent for music, but also a love for country and community. Before the start of the concert the Chapel was buzzing with excited men and women as they gathered together once again to share in the evening’s recognition of service, both past and present.

One of the final pieces, the Armed Forces Salute, was a highlight of the night, asking both service members and their families to stand according to the anthem which represented their branch. Standing tall, Major Bartel snapped to attention, saluting as each group of men and women stood. Closing the evening, the band’s rendition of The Stars & Stripes Forever and God Bless America drew enthusiastic rounds of applause from the audience, bringing the night to a close. With many shared stories, smiles, and handshakes, Regent University and the U.S. Army TRADOC Band once again brought together members of the community in celebration of those who place their lives on the line for the cause of American liberty and freedom.

Dr. Roberts Presents on the Global Scope of Servant Leadership 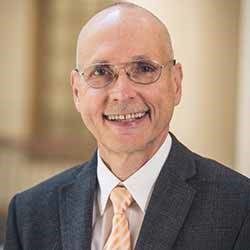 RSG Professor, Dr. Gary Roberts, presented a summary of his recent research on the global scope of servant leadership at the 2018 Annual Leadership Research Roundtables. The event was sponsored by the Regent University School of Business and Leadership. His research demonstrates that servant leadership is highly effective in promoting effective attitudinal, behavior and performance outcomes across a wide range of cultures and nations. Dr. Roberts stressed that servant leadership is consistent with the values residing in the major world religions of Christianity, Judaism, Buddhism, and Islam. The final version of the research will appear in the upcoming Palgrave Handbook of Workplace Strategy and Fulfillment to be published later this year. 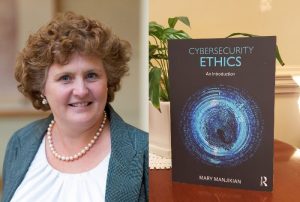 In celebration and recognition of her recently published book, Cybersecurity Ethics: An Introduction, Dr. Mary Manjikian was invited to participate in an induction ceremony hosted by the Regent University Library. The ceremony is a much anticipated feature of the Spotlight on Faculty Scholarship which honors Regent faculty and recognizes their publications and projects with an official induction into the Library collection. Dr. Manjikian and fellow published colleagues were honored to approach the display table to sign the book that will be placed into the Regent University Faculty Author Collection. 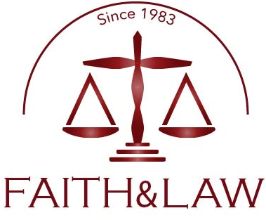 Dean Patterson spoke on Capitol Hill for the bi-weekly Faith and Law forum. For thirty years, Faith and Law has brought a wide variety of distinguished speakers to address contemporary political and cultural issues for the benefit of congressional staff, including Os Guiness, Jennifer Marshall, Ryan T. Anderson, and Marvin Olasky in 2018.

Dean Patterson focused on the Christian Just War tradition and its relevance for contemporary policy, with a specific focus on the importance of legitimate political authorities—elected officials and their designees—being the focal point for decisions about the use of force. “We need to distinguish between legitimate, bounded, lawful, focused ‘force’ as distinct from illegitimate, unlawful, unrestrained ‘violence.’ We can tell the difference between using force to protect the innocent and brutality; we can tell the difference between justice and vengeance,” he said. 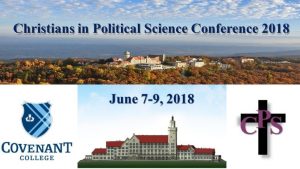 In early July, a strong contingent from the Robertson School of Government (RSG) participated in the Christians in Political Science conference held at Covenant College in Lookout Mountain, Georgia. Dr. A.J. Nolte presented a paper analyzing the politics of tribalism and globalization through the lens of the Muslim philosopher Ibn Khaldun, and served as discussant on a panel on C.S. Lewis and politics. RSG student and research assistant, Ethan Perez, also presented a paper, analyzing China’s engagement with North Korea in light of international relations theory perspectives. RSG adjunct, Josh Hastey, also attended the conference, and represented RSG well.

The theme of the 2018 CPS conference was realignment, and topics discussed ranged from globalization to healthcare, to religious liberty at home and abroad. Christians in Political Science is an ecumenical association of Christian scholars dedicated to biblically orthodox Christianity within political science. Their conferences, held biannually, bring together Christians from across the political science discipline to share research, discuss ideas, and for purposes of prayer and Christian fellowship.