I wish that you could meet our students and alumni! They are simply outstanding and a new cohort of alumni will shortly leave the university for future leadership roles across the country and around the world.

You will see that legacy in this issue of our newsletter. Current student Sonya Mills recently left campus with her husband and is now an intern with the Hawaii Emergency Management Agency. You’ll also be reacquainted with one of our early alumni, now Distinguished Professor of Government, Robert F. “Bob” McDonnell, who most recently served as Governor of the Commonwealth of Virginia.

Regent’s motto is “Christian leadership to change the world.” From Virginia Beach to Honolulu and beyond, Regent’s thousands of alumni are doing just that: serving their communities, leading organizations, and working toward the common good. 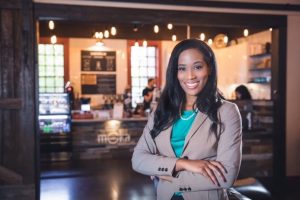 Sonya Mills is looking forward to graduating this May with a MA in Public Administration. She is an online student who lives with her husband in Hawaii. While finishing her studies, Sonya is interning with the Hawaii Emergency Management Agency and preparing for a more permanent role in the fields of Emergency Management or Homeland Security.

Sonya has always had a passion for government but found that she was unable to serve in the field the way she envisioned without experience or an advanced degree in the field. She lived in Virginia Beach at the time and discovered Regent University was a multi-dimensional answer for her as she began work in the Office of Admissions and enrolled in RSG as an online student.

Mills expresses her long-time interest in terrorism and national security studies, and notes that Dr. Manjikian’s class on Intelligence and National Security was her favorite during her time at RSG. Mills says Dr. Manjikian is just one of many “high-level leaders who bring a wealth of knowledge and current public service experience to enrich the education of RSG students.” Sonya also highlights RSG’s focus on leadership, academic excellence, and a desire to equip students with the tools to strengthen the moral and ethical foundations in government is what sets RSG apart from other schools. 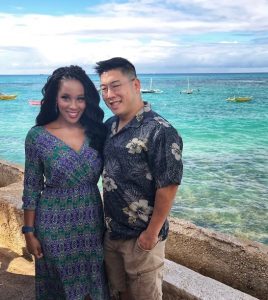 Mills emphasizes the importance of strong ethical and moral fortitude in light of the current political climate and appreciates that, in this respect, RSG “helps challenge students to identify where their ‘lines’ are before going out into a field where so often our values are put to the test.” Sonya believes that government plays such an important role in the everyday lives of people and she embraces the opportunity to serve people by demonstrating compassion, integrity, humility, and excellence while putting other’s needs above her own. Sonya’s determination to act based on moral fortitude, not always common in the field of government, embodies the mission of Regent University graduates to change the world through Christian Leadership. 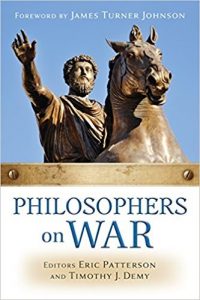 For thousands of years philosophers and theologians, from Aristotle to Hannah Arendt, have speculated on the morality of war and the just pursuit of peace and security.

Dean Patterson, one of the book’s editors, and (Ret.) Col. Keith Pavlischek, one of the writers featured in the book, discussed the work at the book’s launch on Tuesday, March 20 in Robertson Hall. According to Patterson, each chapter consists of a contributor’s critical examination of a classical Western thinker’s philosophies on humanity and conflict.

“For example, the chapter on Aristotle’s views on slavery … that type of view gives you a different perspective of what’s allowable in war and peace,” Patterson said.

Pavlischek, whose experience includes academia, think tanks, deployments to the greater Middle East, and time at the Office of the Director of National Intelligence, expounded upon John Calvin’s beliefs that Christian magistrates are held responsible for protecting those under their jurisdiction, even if force is necessary, and that unjust magistrates and rulers may, in some instances, be removed from power.

“What Calvin had to say, I think, is very instructive,” Pavlischek said. “[He] was very influential into the 18th century, particularly at the time of the American revolution.”

“We come from this tradition that believes that some people have a responsibility to protect the weak, and that justice is very important and that Christians can serve in law enforcement or in the military or in public life to do three things,” Patterson said. “[To] prevent wrongdoing, punish wrongdoers, or right a past wrong.”

“This kind of thinking now is actually part of our DNA in the United States and our closest allies,” he added. “It comes from some Greco-Roman thought … but also from Christian thinkers, like Augustine and others.” 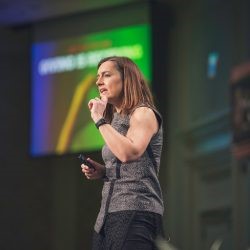 In fact, if there’s one thing the CEO of Flywheel Sports and published author has learned through her lineup of experience working with huge brands like Equinox, Gatorade, Nike and Virgin Entertainment Group, it’s to not only learn from failure, but to lean into it.

Like an athlete leaning forward on an indoor bicycle.

On Monday, March 5, O’Hagan shared her business insights and three methods to “stepping up, standing out and succeeding,” at Regent University’s Executive Leadership Series, a monthly luncheon featuring influential women and men from around the world.

O’Hagan’s story of failure – and allowing it to propel her forward – began in her home country of New Zealand, with dreams of “working for Richard Branson’s airline,” Virgin Atlantic. She was able to step up and stand out by first getting out of line. 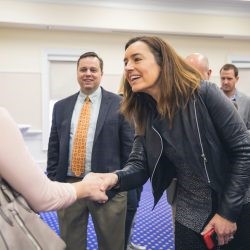 She was 26, and was offered an advertising role in the organization by “stalking” Virgin’s marketing director at a conference. She’d spent every last penny in her move to New York City.

“I couldn’t afford to eat because I had to buy train fare to my job,” said O’Hagan.

Her first day on the job, she learned the woman who’d hired her no longer worked there.

“And I did what any self-respecting woman would do,” said O’Hagan. “I went to the bathroom and started crying.”

In the midst of working in fear that she’d be the next to lose her job, O’Hagan noticed the company was in disarray. There was little leadership, her boss needed help, and she set out to do something about it.

Over the course of a weekend, she drafted a plan and slipped it under the president’s door. This boldness was what eventually led to her promotion running the marketing division.

“You need to add value to the person trying to solve your company’s problems,” said O’Hagan. “See the problems your boss has, help them solve it – that will help you.”

Secondly, O’Hagan encouraged her audience to “pursue epic failure.” After a successful run in her role at Virgin, she moved to the entertainment division of the company – the same year that Napster, the king of digital downloads, took flight.

It did not go well.

“One day I was called into my boss’s office, and I was given one week’s severance and a one-way ticket back to New Zealand,” said O’Hagan. “It was like they were saying, you are so bad, we don’t want you in our company or our country.”

But she held on to the fact that she’d come to the states for a reason, and in a move of admitted desperation, she took a job at Atari. She was eventually laid off.

“There I was in my late 20s having been fired back-to-back,” said O’Hagan. “It’s the reason I can go on and do better … We get so scared of failure, but it’s what propels us forward.”

Thirdly, O’Hagan explained that “playing the specialist card” is what sets businesses apart, especially in an era where consumers are seeking custom-made experiences across all kinds of platforms.

“Be spectacular for a few, rather than average for many,” said O’Hagan.

The 2017-18 Executive Leadership Series will conclude on Wednesday, April 11, with the annual South Hampton Roads Mayors Forum. The event will feature a Q&A-style town hall. 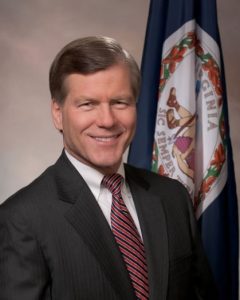 On March 28, 2018, Gov. Bob McDonnell spoke with Regent University students on “The Importance of Civility.” McDonnell, RSG alumnus (MA-GOV / JD ’89), served as the 71st Governor of Virginia from 2010 – 2014, is a retired U.S. Army officer, former Virginia Attorney General and state legislator. The event, closed except to RSG students, was an informal gathering at RSG Dean Patterson’s home. This allowed for a candid, off-the-record discussion about the nature of political competition, personalities, and the incivility of today’s political landscape in Washington, DC.

As he shared his experiences in politics, students were able to understand the need for showing respect to others regardless of their political views and to live a life of humility. Professor Emeritus, Dr. Joseph Kickasola, shared insights on McDonnell’s preparation for service when he was a student in the School of Government. He also presented McDonnell with a reference letter he had written when McDonnell was one of his students nearly three decades ago. 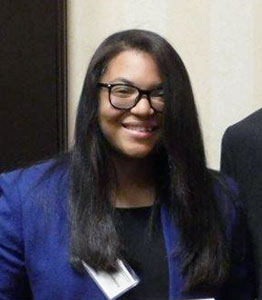 The Robertson School of Government is proud to announce that Regent University voted Tanny Simmons as the Employee of the Month for March 2018. Tanny will graduate with her Master’s in Public Administration degree in May and serves as an Admissions Evaluation Team Coach for Enrollment Management. The award is based on Integrity, Excellence, and Innovation.

Tanny consistently displays a servant’s heart and goes the extra mile for both fellow co-workers and students alike, often doing so without recognition or need for praise. She cares deeply about her team and is available to assist them when they need it. Her fun attitude makes her enjoyable to work with.

Moreover, Tanny has gained the respect and appreciation from her team members. As a coach, she takes the time to utilize effective listening skills in order to promote direction. She makes her team feel heard and understood, giving them the motivation to strive for excellence.

Finally, Tanny continuously generates innovative ideas that help her team become more efficient in their current roles. Whether that is through the creation of her team’s Admissions Evaluator manual or through various online resources geared to improve and enhance employee morale and development, she constantly asks what more she can do for someone else. Tanny was also proactive in fostering interdepartmental connections geared toward creating a sense of unity and communication as a means to find cohesive workflow opportunities. 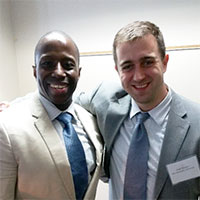 Chaz Rogers presented a paper entitled “Emergence of a New Cold War.” This research focused on the rising tension between nations, mainly Russia, while adapting to changes in a new technological age with one of the new battlegrounds being cyberspace. Will this new Cold War bring rise to new conflicts?