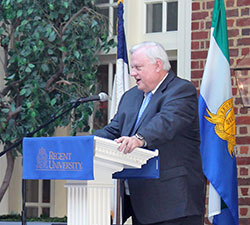 The expansion of technology has undoubtedly impacted lives and vocations on a global scale.

But how has it impacted the law?

Regent University School of Law (LAW) students explored this question at the annual Regent University Law Review symposium titled “The Expansion of Technology in the 21st Century: How the Changes in Technology are Shaping the Law and the Legal Profession in America.”

Students had the opportunity to hear perspectives on “Current and possible future ethical issues with technology in the legal profession” from vantage points of an attorney (Kellam Parks), judge (Judge Kevin Smith) and law firm (Mark Baumgartner).

“We have to adapt,” said the Honorable Robert J. Humphreys, who gave his keynote address “How Changes in Technology are Shaping the Law and the Legal Profession in the 21st Century.”

Humphreys explained that the booming technology trends have not only affected society as a whole:

He explained that while he remembers what he was doing on infamous days in United States history, like 9/11, the JFK assassination, and the Challenger explosion, to him there is one day in our nation’s history that had as great of a societal impact – June 29, 2007 – the day the first generation of the iPhone was released.

Though the legal profession in and of itself is based, in theory, on keeping in line with laws set in the past, Humphreys explained it’s important for lawyers in the 21st century to keep up with the times, especially when it comes to dealing with clients who are navigating issues online.

According to Humphreys, major changes in social and civil rights issues, law enforcement, intellectual property and even legal monopolies have come about with the surge of technology. And in many ways, every profession has benefited from technological innovations.

But the flip side of the coin is that it comes with murky territory. Territory in which clients will depend on their legal counsel and protection.

“You need to be aware of these [changes in technology] or you won’t be able to do your job well,” said Humphreys.

By Katelynn Condrey - Student Writer VIRGINIA BEACH, VA (May 12, 2021) – As Regent University’s Spring 2021 semester comes to a close, our beautiful campus is gearing up for the summer events, including SOAR …

Welcome to the final installation of Regent University's American Election Integrity conference, featuring a review of cases by law professor David Clements. Clements gives a riveting overview of the many …

Be inspired by New York Times best-selling author and radio host Eric Metaxas, as you watch his video from the Election Integrity conference, hosted by Regent University's Robertson School of Government. Metaxas …