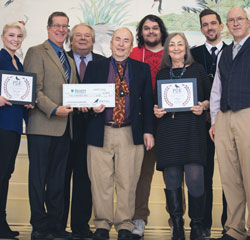 On Friday, January 19, the anniversary of Edgar Allen Poe’s birthday, organizers from the film festival named after the author of American literature — the Poe Film Festival — visited Regent University’s campus in Virginia Beach, Virginia, to award the university $500 for the grand prize Jarrod Anderson ’20, School of Communication & the Arts (SCA), won in their competition in November 2017.

All four films Regent submitted to the festival made the final selections stage. Half of those won prizes — SCA student Jarrod Anderson ’20 received Best Picture for his film “Changing Jane,” and SCA alumni W. Adam Burdeshaw’s ’15 and Nathanael Dunn ’17 received Best Screenplay for their film “Until Death Do Us Part.”

“As a Christian filmmaker it is vitally important to share redemptive messages with the world because there is so much darkness and discouragement out there,” said Jarrod Anderson, director of “Changing Jane” — the film that received the grand prize award. “People need hope.”

“The winning film, ‘Changing Jane’, was very well written,” said Steve Sinnenberg, CEO of the Virginia Screenwriters Forum and owner of Poe Film Festival INC. “The construction of it, the bones of it, were just almost exactly what we were looking for.”

Although he wasn’t judging any of the competition, Sinnenberg described Anderson’s film as “remorse redemption,” and that it demonstrated “perfect film narration,” and was “almost exactly what we were looking for” in regards to the how the plot was paced.

“It tells a story really well,” he added.

So why theme a film competition around Edgar Allen Poe, an author who died more than 150 years ago?

“What Edgar Allen Poe teaches us, is that the most important thing a writer can do, whether it’s [in] a short story, a novel, or even a movie … was to evoke an emotional response in the viewer or reader,” said the festival director Brian Weakland.

Maintaining “intensity,” something Poe did, is a vital piece in this emotive style of storytelling and an element the festival looks for in films submitted by students, Weakland said.

“Regent is the best at teaching story structure, and that comes through in their movies,” he added. “We’re looking forward to Regent’s participation next year.”