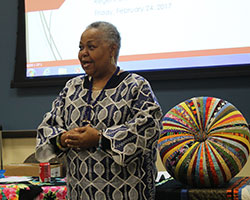 When she announced her intentions to attend an Ivy League college, the words from Dr. Connie Kennedy’s high school guidance counselor are still burned into her memory:

“She said, ‘There are three types of people, suns, moons and stars,’” said Kennedy. “She told me I would never be a sun. And that I should get a good basic education.”

In a time when it was illegal for African Americans to own a library card, or even enter a public library through its front doors, she persevered.

And, drawing from her naturally inquisitive spirit and her intent to “know everything,” she received a four-year academic scholarship to Sarah Lawrence College in New York City.

She returned to her guidance counselor’s office to relay the message that she was a “perfect sun.”

Thus, Kennedy launched into her journey of “coming home” and self-discovery as she shared stories from her autobiographical collection titled One-Hundred Pieces of Sun with the University Library’s monthly Book Talk on Friday, February 24.

Kennedy shared with her audience what it was like growing up in Alabama in the 1950s and her family’s eventual move to Cleveland, Ohio, alongside strong parental influences who taught her first-and-foremost, she was an American. Not a “colored” American.

Her zeal for life and learning set her apart from her peers, so much so that when Dr. Martin Luther King Jr. visited her high school she was selected to be his hostess. She remembers the experience as one of the most important of her life.

“I felt the rest of the room disappear when he spoke,” said Kennedy.

She drew from this experience as she transitioned into her education at Sarah Lawrence – not fully aware that getting into the school would be the easiest part of her experience. Kennedy was one of eight African American students living on campus at the time. She came across students who would watch her in the bathroom to avoid using the same sink, shower and toilet that she used.

She resolved this once by using all four showers, toilets and sinks while her audience was watching. Then left the bathroom with a towel hanging over her shoulder.

But her experience wasn’t all quips and victories. In her book, she shares intimate and humiliating details of her experience with other students confronting her about the color of her skin, using derogatory terms, or by her professors ignoring her answers in class.

“It almost broke me, I remember thinking, ‘Even Dr. King didn’t have to do this,” she said.

But through her experience she remembered one individual who shared in her suffering: Jesus Christ.

“God has trusted me to live out these experiences with grace,” said Kennedy. “And because He trusts me, I try harder every day.”